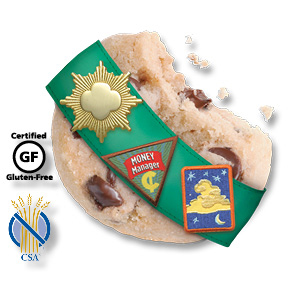 As a former Girl Scout I can still lash together a bamboo campsite washing-up rig that would withstand nuclear annihilation. I wonder if today’s Girl Scouts learn knots?

Some things don’t change, though. You’ve probably noticed that it’s Girl Scout cookie time. Did you know there’s an official Girl Scout Cookie app? It’s just what we need—in mere seconds we can zoom in on the exact coordinates of our nearest Thin Mints®, Caramel deLites®, or Peanut Butter Patties®. Those are the three top-selling Girl Scout cookies, of course, but I wouldn’t be surprised if two new varieties gain a foothold, including a gluten-free one exclusive to O.C. (in Southern California, anyways) getting a lot of buzz.

The gluten-free chocolate chip shortbread delivers a crisp, buttery bite. Its success reflects simple ingredients like a gluten-free flour bend, butter, cane syrup, and egg whites. The sort of thing you want to see in cookies, in other words. And a little whole grain adds flavor to new crunchy cranberry citrus crisps, made without hydrogenated oils or high-fructose corn syrup and a minimum of the dried fruit.

It’s hard to imagine, though they’re part of a pilot program gauging popularity, that the gluten-free cookies won’t be a runaway hit. All nine varieties of Girl Scout cookies are also certified kosher, and four are suitable for vegans. In addition to the popular Thin Mints and Peanut Butter Patties, Lemonades® and Thanks-A-Lots® are also free of animal products.

Cookie sales began last week, and continue through March 9. If you don’t have your own neighborhood mini extortionists or suddenly friendly coworkers with scouts at home, booth sales begin this weekend. Click here for a booth locater.

Gluten-free note: About half of the troops in Orange County opted to sell the new gluten-free cookies, which will be somewhat limited in quantity. Email cookies@girlscoutsoc.org to connect with a troop selling them.