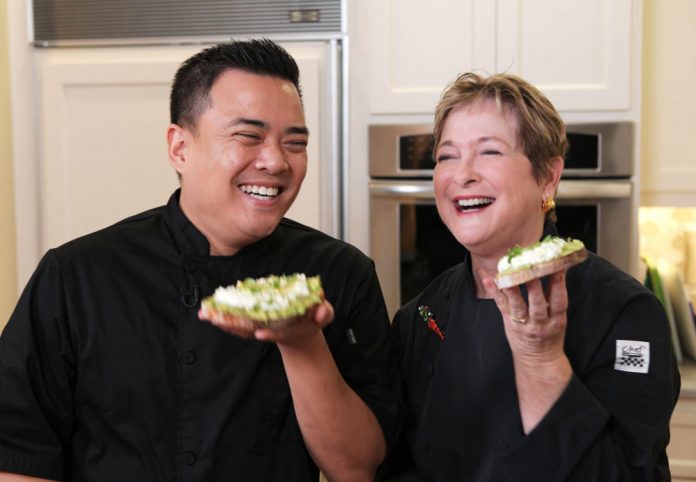 Some pundits say avocado toast is passé. I say hogwash.

Truly great avocado toast is a joy, a creation that rings all the right bells. Crunchy base meets luxurious creaminess, judicious spiciness meets perfect acidity. These sublime contrasts are what greet diners when Paul Cao shows off his toast vision. Cao, executive chef-owner of the Burnt Group that includes Brunt Crumbs in Huntington Beach and Irvine, makes some of the best avocado toast around. He agreed to share his secrets while taping a how-to video in my home kitchen.

First there was a quick avocado lesson. He explained the importance of using a perfectly ripe avocado, not under-ripe hard or over-ripe squishy. Explaining that they start with firm avocadoes that require some advance attention, he wraps them inside a brown paper bag and puts them in the proofer without any heat on. Next morning, they are generally perfect, yielding slightly to gentle pressure. Then they go into the fridge.

Ripe but not overly ripe avocadoes have perfect creaminess and a rich, nutty taste.

The next essential element is high-quality country white or sourdough bread, sliced thick. The slab is well-toasted to a crunchy brown on one side in a skillet thinly coated with olive oil on medium-high heat, and then oh-so-briefly heated on the opposite side, maybe less than 20 seconds. He told me that the bread needs to be firm enough on one side to hold the creamy mixture, but pliable enough on the underside not to fall apart when teeth meet toast.

Halved and then scooped from the pebbly skin, the avocado was cut into chunks using the side of a spoon. He cautioned that the finished mixture should be chunky, not mashed like guacamole. Seasonings included pinches of Maldon Smoked Sea Salt, kosher salt, and togarashi (a Japanese seasoning mix that includes dried chiles, orange peel, sesame seeds, ginger, and seaweed), as well as fresh lime juice and a smidgen of fruity California extra-virgin olive oil. He spread the concoction onto the highly toasted side of the bread. As he approached the edges, to ensure every bite would be amply covered, he used the spoon held at a right angle to press more mixture into place.

A topping of house-made ricotta added even more creaminess. It brought hints of orange zest and subtle acidity to the party. The cheese was sprinkled with a little more smoked salt, togarashi, lemon zest, olive oil, and micro-cilantro. Divine.

Little Boy Start: As a 5-year-old boy he remembers pounding garlic in a mortar and pestle as an ingredient for his mother’s Vietnamese-style egg rolls. He says that his mom, Dung Cao, is a great cook, as is his maternal grandmother.

Engineer, Doctor, CPA, Chef: His education at UCLA took a few twists and turns. He thought engineering was his calling. After a short time, he decided he wanted to be a doctor, so he was a pre-med major for the first two years. He pulled the plug on that to take business and accounting. Afterward, while at Merrill Lynch and working toward his CPA, his father passed away. The loss fueled another career change, the one that stuck, the one that followed his passion. He went to culinary school (against the advice of his mother and aunt) and loved it. He frequently went to Ralphs market, bought produce, and practiced his knife skills over and over and over at home.

Collector: He collects sneakers; he has close to 200 pairs. Air Jordans are his favorites. His wife, Carol, is a minimalist; no shoe collections for her. The two live in Irvine with their 1- and 2-year-old sons.

Secret Talent: He is good at math. He sees numbers differently than most and is often faster at figures than a calculator.

Home-Cooked Blues Cure: The Vietnamese dishes his mother cooks are therapeutic, as are the from-scratch Korean fare that his mother-in-law prepares. About 1 teaspoon extra-virgin olive oil, plus more for avocado mixture and topping

1 ripe but not squishy avocado