There is mischief in Amar Santana’s eyes as his exuberant laughter fills my kitchen with culinary joy. He is relaxed, his confidence driven by a passion for cooking and well-proven skill sets. The celebrity chef joined me to share the secrets of his silky corn pudding, a versatile side dish that can accompany everything from steak to sweetbreads. This day he teamed it with chicken breast, cooked sous vide and then sautéed at the last minute to make the skin golden brown and potato-chip crisp. Scrumptious.

Santana along with his business partner Ahmed Labbate are set to open a third restaurant, the Hall Global Eatery at South Coast Plaza. In addition to their other restaurants, Broadway by Amar Santana in Laguna Beach and Vaca in Costa Mesa, the new spot is in an enormous space that occupies over 7,500 square feet. Construction delays have stalled the opening; often referred to simply The Hall, it’s now projected to open later this year.

“It will be an all-day eatery, for breakfast, lunch and dinner,” he explained. “One part will be a coffee shop—think of Starbucks but everything is better. Instead of a $7 microwaved sandwich, come to me for homemade brioche and eggs that are made fresh in front of you. Freshly squeezed juices. Come in for breakfast one day before you go to work, then come in for lunch the next, then the next day to grab something to take home for dinner or eat dinner there.”

Other areas will offer a wide array of choices: a Mediterranean grill with everything from hummus to a kebab grill to shawarma rotisseries, a crudo bar that will showcase sliced fresh fish garnished with olive oil, lemon juice and sea salt, plus a cheese and charcuterie bar that will include a wide array of Spanish meats. There will also be a full-service restaurant and a cocktail bar.

A former finalist on Bravo TV’s “Top Chef,” Santana also starred in a cooking competition show in South Korea, “Korean Food Battle.” He says that he is so recognizable in South Korean that fans approach him on the street to say hello and take selfies. I wonder what those Korean judges and fans would have thought of his corn pudding. I bet they would have adored it.

Favorite Knives: Feder knives. He says that they are works of art, handmade to order in upstate New York. He loves his 10-inch chef’s knife and the oyster knife that he says opens oysters as simply as cutting through butter.

Eateries of Choice: He loves Asian food. Chong Qing Mei Wei Szechuan Restaurant in Irvine. He says that the pepper shrimp is amazing, nice and spicy. It’s Tan Cang Newport Seafood in Santa Ana for lobster. And LSXO in Huntington Beach, where he says that Chef Tin Vuong is a major talent.

Typical breakfast: He likes the fresh juice drinks at Mother’s Market. His usual is the Liver Cleanse (beets, lemon, ginger, and parsley), plus on the side, 2 ounces of wheatgrass and 2 ounces of ginger. He says that they will make great fresh juice combos at The Hall.

Luxury Sneakers: He collects them and says that he loves Kanye West’s Yeezy brand from Adidas Original. The store at South Coast Plaza saves a pair for him when a new model comes in.

Biggest Culinary Influencer: His cooking is influenced by travel but also by talking to his guests, who he describes as well-traveled foodies. They tell him about new dishes that they think he would like. He is also a fan of Charlie Trotter’s cookbooks. He says that even though some are decades old, they are still fresh because the late chef was so far ahead of the time.

Favorite Veg: The carrot. He points out that it is very versatile; you can use it for an appetizer, starter, main, or dessert. You can fry it, bake it, smoke it, or juice it. He has created a salmon belly ceviche in carrot yuzu for the crudo bar at The Hall.

Amar Santana’s Hall Global Eatery is likely to open in November or December in the space formerly occupied by Z’Tejas Southwestern Grill at South Coast Plaza. 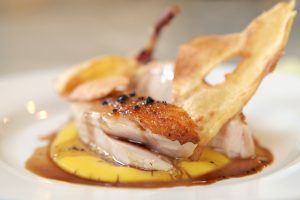 Here’s the formula for the simple-to-prepare corn pudding. Although the chef served it with challenging-to-prepare accompaniments, it’s so delicious you can simply serve it with grilled steak or chicken, or roasted Brussels sprouts or sautéed wild mushrooms or roasted salmon. Or, if you feel like it, put it into a bowl and eat it with a large spoon.

Cook’s notes: Santana made the corn puffs with corn juice made by juicing corn kernels in an electric juicer. He combined the corn juice with some rice flour in a saucepan, then cooked it, stirring constantly, until it became a glutenous dough. He spread it out on plastic wrap and steamed it, then put it into the dehydrator for 24 hours. Voila!