When Tavern House Kitchen + Bar opened last summer in Newport Beach in the spot formerly occupied by 3-Thirty-3 Waterfront, longtime fans of restaurateur David Wilhelm rejoiced. The oh-so imaginative master of restaurant development has a 40-year history of creating eateries in Orange County. It’s a long list that includes Chat Noir, Kachina, Chimayo, Bistro 201, and French 75, but it was his restaurant in Dana Point, Jimmy’s Famous American Tavern, where he connected with chef Michael Payne.

Classically trained at Le Cordon Bleu in Pasadena, Payne is Tavern House’s executive chef. His resume showcases work in several prestigious kitchens in the Midwest before he settled in California. At Tavern House, the seafood dishes are irresistible, with everything from bourbon barbecued oysters to snapper Veracruzana.

It’s his take on salmon crudo, a super-fresh fish carpaccio, that is one of my favorites. This vibrant, pretty-on-the-plate dish starts with thinly sliced salmon; it’s arranged slightly overlapping in the center. But the party doesn’t end there. Blood orange, some juiced for a vinaigrette and some cut into slices, adds an appealing sweet-tart flavor edged with a hint of raspberries. Pickled onion adds a sweet-tart element as well. Thinly sliced fresh serrano chile, seeds and all, bring just-right heat, while pitted apple-green Castelvetrano olives donate a welcome buttery taste. A drizzle of extra-virgin olive oil, a sprinkle of pink Hawaiian sea salt, and some freshly ground black pepper. A little scattering of micro arugula. Voila.

Payne graciously consented to show me how to prepare his crudo by joining me in my home kitchen to tape a video. He offered a make-ahead tip that is useful for home entertaining: Up to one hour in advance, arrange the sliced salmon on chilled plates, then cover with plastic wrap and press down lightly with the palm of your hand to slightly flatten the fish; refrigerate. Have the remaining ingredients ready to arrange on the plate just before service.

Top Mentor: He credits Wilhelm as his greatest teacher, noting that he isn’t afraid to push. Wilhelm influenced him to open his eyes and never be satisfied with mediocrity. He always explained the “why,” offering advice about the little details.

Wilhelm Wisdom: Having worked with Wilhelm for six years, he recalls the early days at Jimmy’s Famous American Tavern, when he was a fry cook. He was tossing a salad using metal tongs. Wilhelm leaned over the pass-through window and told him to put down the tongs and use his hands to avoid bruising the lettuce. Great advice he follows to this day.

Drink of choice: Jammy red wines, big and bold. Wines that he says punch him in the mouth.

Dream project: A restaurant of his own. Originally, he imagined a small place with 60 seats, but says he has revised it to something much bigger, maybe 170 seats. He says he has grown to love a high-volume pace.

Secret Talent: Before he became a chef, he was a very successful electronics salesman. He has a passion for electronics but says that it couldn’t compete with how rewarding it feels to see a guest’s face when they take a first bite. That look makes all the hard work worthwhile.

Pickled Onion Know-How: Pickled onions make a delicious garnish on his crudo. To make them, make a brine using a 1:2 ratio of red-wine vinegar to red wine. Place it in a saucepan along with granulated sugar (the same amount as the vinegar) and freshly ground black pepper. Bring to a boil; off the heat, add thinly sliced red onion (an amount that will be covered by the brine). Cool to room temperature. 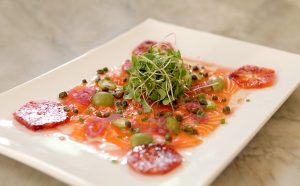