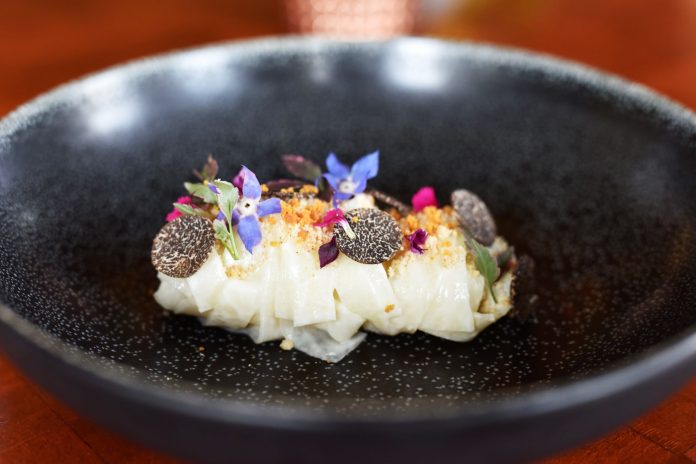 A couple of decades ago, a vegetarian request at a restaurant probably resulted in a large bowl of pasta or rice topped with some haphazardly-cooked vegetables. If you were lucky, maybe there was a leaf or two of fresh basil. Overall, the experience was uninspired.

Gratefully, the mindset has changed and menu options for guests preferring a plant-based diet are many. For me, the most alluring meat-free offering is the six-course vegetarian Tasting Menu at Studio at Montage Laguna Beach.

For three years, Executive Chef Craig Strong has offered seasonally inspired vegetarian tastings as a menu option at the elegant waterfront restaurant. Strong describes his cuisine, with meat or without, as modern French with California influences. The scrumptious backbone is classic, but there are joyous surprises added by way of molecular gastronomy.

Stunning on the plate and delicious on the palate, the dishes are extraordinary and could never be described as spa food.

“In general I think we like to eat healthier,” he says. “Modern food wants to go that way. But people want to taste rich and indulgent flavors like my French mentors taught me long ago with their appreciation of butter and cream. Time honored traditions are around for a reason; they make food delicious. If you can make dishes taste like they did before, and cut those heavy rich calories down, not only is it better for you, you feel lighter at the end of the meal.”

When designing a vegetable-centric menu, he understands that guests want a hint of indulgence; sometimes that means using a bit of cream or butter. They want a sense of richness woven into dishes in a balanced way.

“We try to create something familiar and something new at the same time,” he explains. When I wrote the menu, I wanted a strong theme of classics reinvented. I love pairing words that are similar; the name of the dish is part of the fun.”

Celerini Alfredo instead of Fettucine Alfredo (yes, he made up the word “celerini” because the noodles are strips of celery root). Pot “Ato”-Au-Feu instead of Pot-Au-Feu (because spuds are the star, not the beef that is used in the classic dish). You will recognize the wordplay as the menu is revealed. As you read, imagine their beauty on the plate and the ingenuity that went into their making. And notice the importance of the garnishes, the raw elements that add color, texture and flavor.

You say you aren’t a vegetarian? Not to worry. These dishes can be ordered a la carte and would team delectably with meat selections.

Crimson Beet Tartare: Instead of beef tartare, the classic dish that showcases chopped raw beef topped with an egg yolk, this delicious twist is free of meat and egg. Roasted red beets are chopped to create the “tartare” and the looks-exactly-like- yolk is crafted from golden beet puree. The deep crimson beets snuggle disk-shaped in center plate, with a ring of perky horseradish-spiked crème fraiche piped around the circumference. A few fernlike tiny leaves of micro chervil dot the top, while two tiger-striped violas sit on either side. Mild acidity teamed with the just-right biting flavor of horseradish makes the dish irresistible.

Crispy Rice Paella: Chef’s memories of his time spent cooking in Barcelona, Spain, are reflected in this flavor-packed dish. He says that for most people the favorite part of paella are the crispy bits at the bottom of the pan, the socorrat. The toasted smell and crackling sound are very appealing. So he created this dish to highlight the socorrat ideal. He cooks short-grained rice in vegetable stock augmented with soffritto and saffron. Finished with grated Spanish Manchego cheese, the mix is formed into small patties and sautéed until golden brown. They are served atop a tasty smear of romesco sauce made from a recipe learned in Barcelona. Tiny cooked vegetables garnish the dish (among which was the smallest micro-carrot I have ever savored) along with tiny sorrel leaves. Celerini Alfredo: Oh boy, celery root noodles! The garlic cream sauce tastes deliciously decadent, but it incorporates half the amount of cream that is most commonly used in Alfredo. Instead fifty percent of the sauce is made of pureed celery root, adding silkiness to the texture and heightening the celery flavor. The creamy mix of sauce and “noodles” is sprinkled with brown butter crumbles, nutty bits made with mild solids browned in clarified butter; they add crunchy texture contrast, much like toasted bread crumbs sprinkled atop spaghetti. As for the garnishes, they are magnificent: shaved black truffles from the Perigord in France, snowflake celery with pinkish-white tips, bright blue borage flowers that taste like cucumbers.

Pot “Ato”-Au-Feu: This potato variation on the theme of the classic French stew shows off potatoes in several ways: a potato croquette, a potato cup filled with potato mousseline, potato “bone marrow” and a crisp waffle-cut potato gaufrette. Served in a shallow bowl, the deep brown roasted vegetable broth is poured tableside. The sauce is so deliciously meaty it’s hard to imagine that it is made without meat or bones. Chef Strong credits his sous chef, Ben Martinek, for mastering it. At the heart of the sauce are roasted and deeply caramelized onions, mushrooms and root vegetables. They lend natural sweetness as well as umami flavors. After pureeing with a hand blender, a small amount of sherry vinegar is added for a spark of acidity.

Fleur du Maquis: Some might view this as the cheese course, because a generous wedge of fleur du maquis reigns over the plate. It’s a sheep milk cheese from Corsica, soft in texture with floral notes derived from a coating of dried aromatic herbs and juniper berries. Also on the plate, a miniature squash stuffed with ratatouille, onion puree and a crisp eggplant chip. Deconstructed Pistachio Pavlova: This luscious dessert looks a little like artistic Tinker Toys. Dried French meringues, both disks and cylinders, are dried in a dehydrator until noisily crunchy. They team with pistachio ice cream, whipped pistachio ganache and candied pistachios rolled in chocolate. Also on the plate, some pistachio paste, lemon marmalade and crème Chantilly. And a perfect white and purple pansy reclines on one side.