Restaurateur and executive chef Maro Molteni has reopened the Royal Hawaiian, the iconic Laguna Beach restaurant established in 1947. Molteni is no stranger to the neighborhood. His former eatery a few miles south on the highway, Maro Wood Grill, was a favorite with locals for years; he sold it in May 2017.

Some Royal Hawaiian classics remain on the menu: poke, kalua pork, and lomi lomi salmon, as well as the original lapu lapu cocktail. But don’t think the restaurant is limited to decades-old tropical traditions. His ambitious menu shows off his talent for wood-grilled dishes showcasing organic meats, fresh-caught fish, and local seafood. Fresh vegetables play a big part on the plates. Roasted or grilled, these colorful veggies aren’t an insignificant afterthought but a delicious and generous compliment to the featured protein.

Born and raised in Buenos Aires, Argentina, his talent for cooking over a wood fire is instinctive. His charisma along with boundless enthusiasm make grilling over hardwood sound like an art form. In an enticing tone, he explained that for the most delicious results, the fire needs to be built just right and the flames need to burn down into perfect coals. He uses slow-burning mesquite, but in Argentina, quebracho wood is most often the choice.

Wood-grilled steak remains his personal favorite. He smiled as he admitted that he eats five or six small steaks a week yet maintains a low cholesterol count. He credits the high quality of the meat for his good health, organic beef that is sourced from Kansas. Luxury cars or caviar aren’t a priority; for him, it’s a great steak. Bringing in grass-fed beef from Argentina is planned for the near future.

He joined me in my home kitchen to videotape his take on home-style ribeye steak. Rather than using a wood grill, he seared the richly marinated steak in a skillet on the stovetop and finished it in the oven. He accompanied the steak with three sauces, components that could be prepped in advance. Made in advance, these sauces can be gently reheated before service. While the steak is marinating, prepare the Maui onion salsa, celery root puree, and pepper puree. 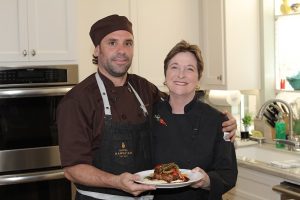 Restaurant Philosophy: He played soccer, a sport in which teamwork is key. Teamwork applies to successfully running a restaurant as well. It’s essential.

Global Favorite: Don Julio, a steakhouse in the heart of Buenos Aires, Argentina, is his favorite. The quality of the meat is superb. The restaurant has its own farm, where the cattle are grass-fed. The restaurant is large and does about 400 covers a day.

Drink of Choice: Red wine, such as a malbec from Argentina; Mendel is one of his favorite vineyards.

Cuts: He favors beef cuts with lots of flavor, such as a top sirloin cap. He cooks it whole over the wood coals, slow and low, then lets it rest. At service, it’s cut into portions and finished on the wood grill.

Biggest Culinary Misstep: His brother Martin Molteni is an award-winning chef and his partner at the Royal Hawaiian. Long ago when Martin was opening at an upscale restaurant in Argentina, Maro pitched him the idea that he would learn to be a pastry chef. Maro practiced at home, making dozens of apple tarts, chocolate mousse, banana cakes, and banana mousse. The day before the restaurant opened, he was asked to make 36 apple tarts. Martin told him he wanted the tarts to have a golden color on top. When Maro took the tarts out of the oven, they weren’t golden-brown enough, so he put them back in the oven for one additional hour. The tops looked fine, but the bottoms were burned black. He was terrified, so he dusted them generously with powdered sugar and left them at the restaurant. He went home, and closed and locked his bedroom door. He awoke later with a very angry brother yelling at him, shouting that this had been his first order and his last order. He was furious. Maro feared for his life.

Royal Hawaiian at 331 N. Coast Highway, Laguna Beach. See menu at royalhawaiianlb.com. Parking lot is half a block north on the highway. 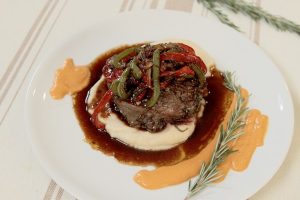 Cook’s notes: The recipe provides larger portions of side sauces, enough to accompany up to three additional steaks.