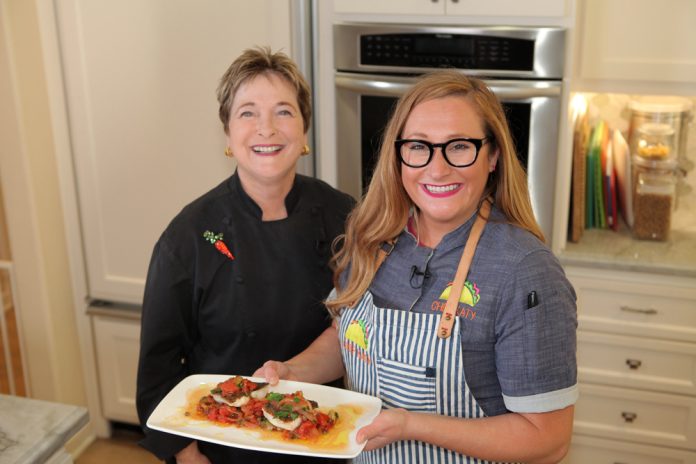 Katy Smith, executive creative chef at Puesto, is best known for her hip tacos, handmade blue-corn tortillas and craft cocktails, but those delicacies only scratch the surface of her talent. Puesto, with two locations in Irvine as well as others outside Orange County, serves up a wide variety of Mexican-themed dishes, many with Smith’s irresistible twists.

Her guacamole is one example. She includes traditional takes on the avocado-based concoctions, spiking them with just-right amounts of fresh lime juice. Other renditions are augmented with ingredients fueled by her culinary inventiveness. Guacamole Nogada is a delectable treat, a balanced mix of sweet, salty, sour and creamy nuttiness; it’s garnished with cubed mango, pomegranate arils and candied nuts.

Among her traditional dishes one of my favorites is Pescado Veracruzana, a dish that showcases fish fillets adrift in a scrumptious sauce primarily made with diced tomatoes, green olives, pickled jalapenos and capers. On the menu, instead of fish fillets, she often riffs on the theme and substitutes shrimp for the mellow white-fleshed fillets.

In my home kitchen, tapping a how-to video, she prepared the more tradition version using black cod that she sautéed skin down to create a potato-chip crunch on the surface. She started the Veracruz sauce by sautéing a sliced white onion, an onion variety that is most often used in Mexican dishes. That variety has a clean, interesting taste and is more tender and thin skinned than other varieties.

Fish Veracruz-style is a welcome recipe for home cooks to have in their arsenal. The sauce can be made in advance (capers should be added at the last minute to prevent over-saltiness). And it takes a very short time to prepare the fish right before serving. Accompany it with rice and maybe some ice-cold margaritas.

Secret Skill: She sings and grew up acting in musical theater productions. When she attended University High School in Irvine, she played the lead in “Singing in the Rain.” Joyously, she jumped out of a giant cake.

Favorite Restaurant: Locally, she loves 370 Common. It’s walking distance from her small 40’s Laguna Beach cottage. She says that the restaurant feels like home with incredible roast chicken and “the best” french fries. She also adores Chicago’s Fat Rice, an eatery with an alluring Macanese menu.

Her drink: Rye Manhattan on the rocks.

Best Cookbook: “A Boat, a Whale & a Walrus: Menus and Stories” by James Beard Award Winner Renee Erickson, the chef and owner of several Seattle restaurants. When she reads it, she feels like she is on a vacation. She appreciates the way the author strives to take care of her employees.

Mentor Magnífico: She says that celebrity chef-restaurateur Rick Bayless changed her life. She worked with him on the media side of his career as kitchen director for season 10 of Bayless’ Emmy-nominated PBS series, “Mexico – One Plate at a Time” and traveled with him on Mexican culinary tours. Cook’s notes: Chef prefers jalapeno escabeche because the chilies are pickled with onions and carrots, but plain pickled jalapenos can be substituted. Remove any stems from oregano (and discard the stems). Rub the oregano leaves between your palms before adding to mixture.