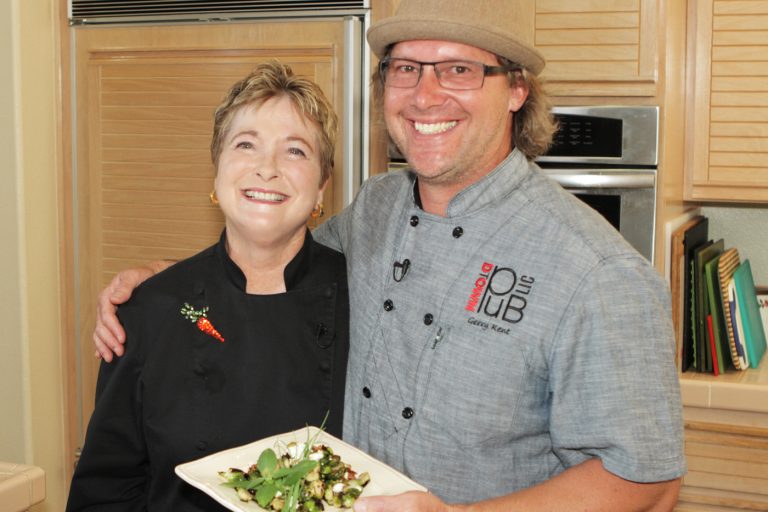 Brussels sprouts are nutrient-packed little rascals, but many of us have negative memories. We remember them as nasty orbs with a wet navy-green hue. Overcooked in boiling water, they were squishy and laced with an off-putting sulfur smell.

So, how did they become one of the most sought-after vegetables on restaurant menus? Chefs learned to use dry heat cooking methods, without including even a whisper of bubbling water. The taste and color is inviting. And they aren’t stinky. “High and dry is best,” explained Gerry Kent, the executive chef-partner at Public 74, the San Juan Capistrano gastropub known for its delectable comfort food. Kent joined me in my home kitchen to videotape the preparation of his popular Brussels. He started by roasting the halved beauties in a 500-degree oven until they were tender crisp with a just-right char on their exterior leaves. While still warm, they were tossed with dried basil and parsley, plus dried red chili flakes for a touch of spicy heat.

He added both sweet and savory elements to the dish. A balsamic vinegar glaze augmented with brown sugar was judiciously drizzled over the plated Brussels. It was thick and syrupy.

“The brown sugar has molasses, which brings added richness and sweetness,” he revealed.

A secondary sweetness came from dried cranberries simmered in red wine; they were scattered over the top and tossed in the mix. He said that chopped dried figs, dried cherries or dried blueberries could make suitable substitutions for the cranberries.

For a final flavor boost, he added tanginess with crumbled goat cheese, a welcome garnish that added a gusty edge and welcome creaminess. Even the most ardent cruciferous vegetable hater might be tempted. Why not?

Early start: At 16, Chef Kent started working at a little mom and pop Italian restaurant-deli in Fresno. He cooked in the mornings, and was a server in the evenings. He enjoyed the “table interaction.”

Restaurant fave: One of the many mentioned was Il Barone Ristorante in Newport Beach. Long ago, before Il Barone existed, he worked with chef-owner Franco Barone in the kitchen at Antonello Ristorante, Santa Ana.

Ingredient love: Pink peppercorns are a passion. When working on a project, he ground up white, green, black and pink peppercorns. He was impressed with the individual character of each, noting that the pink peppercorns had a distinct berry-ness and a fruity citrus-spiked heat.

Brussels tips: Brussels sprouts that are small and tightly packed are best for roasting. Avoid those that have yellowing or soft spots. If they are sold packed in a container, look for a package that has Brussels that are the same size for even roasting. Refrigerate them unwashed in a perforated bag in crisper drawer up to 8 days.