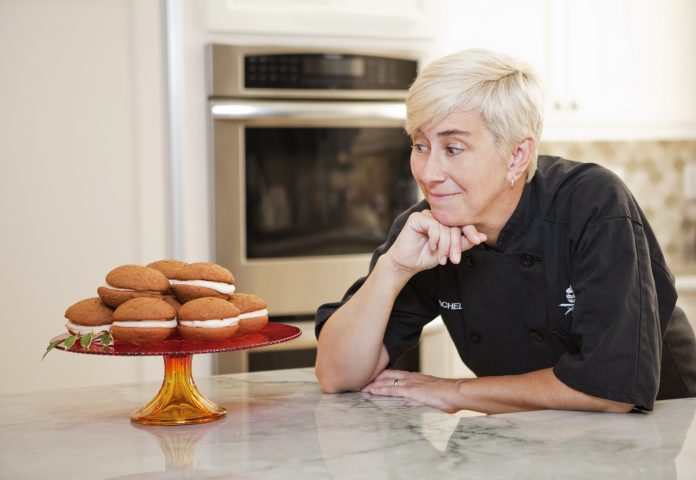 Rachel Klemek, executive pastry chef-owner of Blackmarket Bakery in Costa Mesa, Santa Ana and San Diego, loves the whimsey of whoopie pies. She says the name connotates party-like fun. And the treat is a cake that is portable; it can be picked up and easily eaten out of hand.

Her pumpkin-spiked whoopie pies showcase flavors associated with fall; a rainbow of autumnal spices and a small dose of molasses bring palate memories of sweet indulgences centered around Halloween and Thanksgiving. The cakes sandwich an irresistible cream cheese filling. She doesn’t chintz on the creamy filling; it’s added with generosity, piped from a plastic pastry bag to form a thick spiral.

Klemek realized that she wanted to become a professional baker in her late 20’s, inspired by the mountains of sourdough bread that she crafted at 27, gifting surplus loaves to neighbors. At 31, after the arrival of her fourth child, she started her formal culinary education at The Culinary Institute of America at Greystone in Napa. Her two older children were in school, and her husband David cared for the two younger children at home.

It couldn’t have been easy, but her talent and determination placed her at the top of her class. She draws on that resolve, energy and skill to maintain her topnotch bakeries – with made-from-scratch baked goods with irresistible taste and eye appeal.

Breakfast Simplicity: Advising that she’s not a fancy person, she says she prefers toast – either sourdough or almond six-grain – with homemade peanut butter and jelly.

Special Talent: Listening to husband, kids and staff. She strives to listen more than tell.

Unique Expression: She and her husband use the word “gribley” to describe a nugget that comes off something, such as a nubbin of cooked batter.

Baking Mentor: Michele Bracken (her first boss after graduating), executive pastry chef at Zov’s Bistro and Bakery in Tustin, deeply inspired her with a supernatural ability to keep track of everything that was going on in the bakery’s kitchen. She seemed to have a sixth sense about multiple simultaneous processes.

Drinks of Choice: Gin and tonic, brown ale or black coffee are her favorite thirst quenchers.