Brittany Valles, executive chef at Oak Grill at the Fashion Island Hotel, adores the bright flavor and crisp texture of sugar snap peas. Her fondness for these plump crescent-shaped beauties earned her the nickname of “sugar pea” in a previous job.

Both the pods and the rows of peas inside are edible, their vegetal taste edged in welcome sweetness. She appreciates their versatility and bright green color, whether eaten raw or briefly cooked just enough to make them just barely tender.

It’s the super-crunchy uncooked approach that she shows off in her delectable salad, a dish augmented with lemon yogurt and almond granola. The sugar snaps are tossed with a scrumptious agrumato-style olive oil, extra-virgin olive oil pressed with whole lemons. Seasoned with a little coarse salt, they sit atop a bed of Greek yogurt spiked with lemon. A crown of nutty-sweet granola scatters on top, maple syrup balancing a judicious amount of onion powder and garlic powder mixed into the oats. The granola could also serve as a breadless topping for other vegetables or creamy gratins. 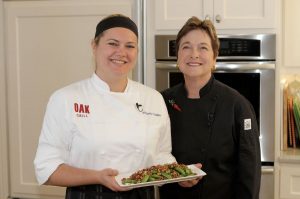 Without the yogurt, the dish can become a vegan dish by substituting tofu pureed in a blender. Either way, the dish is a winner. But keep in mind that Valles’ irresistible short ribs were named 2019 Dish of the Year by Orange Coast magazine, so you might want to give those ribs a try, too.

Before working at Oak Grill and Aqua Lounge, she served as chef de cuisine for seven years at now-shuttered ink.well by Michael Voltaggio in West Hollywood. Voltaggio remains a cooking and personal mentor to Valles, along with her early teacher Chef Cole Dickenson, who recognized her potential when she worked with him at Wolfgang Puck Catering at the beginning of her culinary career.

Valles gained a prestigious nomination for Star Chefs’ Rising Star Chef in 2017 and was the “Sandwich Queen” in an episode on munchies on “Chef’s Night Out.” She earned an Associate of Arts degree from Le Cordon Bleu College of Culinary Arts in Los Angeles, Pasadena campus, in 2010. 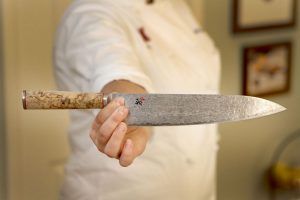 Few Folks Know: She had a modeling career from ages 7 to 10. Her photo appeared on the backs of three Barbie doll boxes among other Mattel products.

Best Knife: Her standby is a 10-inch gyuto knife made by Miyabi. A gyuto is the Japanese version of the classic Western chef’s knife, but the blade tends to be thinner and holds a sharper edge. It has a beechwood handle and is easy to sharpen.

Good Eats: Her favorite O.C. restaurants include Cucina Enoteca in Newport Beach, where she admires their creativity, as well as small ramen eateries. She enjoys her neighborhood ramen place, Huntington Ramen.

Mentor Grandpa: Her large and close-knit family often gathered for celebrations on the sand at Seal Beach. Her grandfather taught her how to make great clam chowder in a motorhome parked on Seal Beach Boulevard. He taught her how to properly cut an onion atop a cutting board resting on an inverted paint bucket.

Collector: She collects spoons of all shapes and sizes, in addition to rings crafted from spoons.

Drink of Choice: A Penicillium cocktail: Scotch mixed with lemon and ginger served on the rocks. Laphroaig 10-year-old single-malt Scotch is preferred; she likes its smokiness. 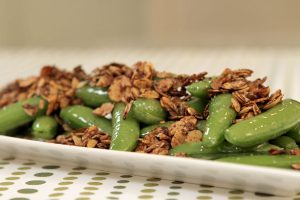 Juice and minced zest of 1 lemon

To remove skin from almonds, bring a small pot of water to a boil and add almonds. Drain immediately in colander and rinse with cold water to cool them. Blot with paper towel and gently squeeze almonds to remove skins.