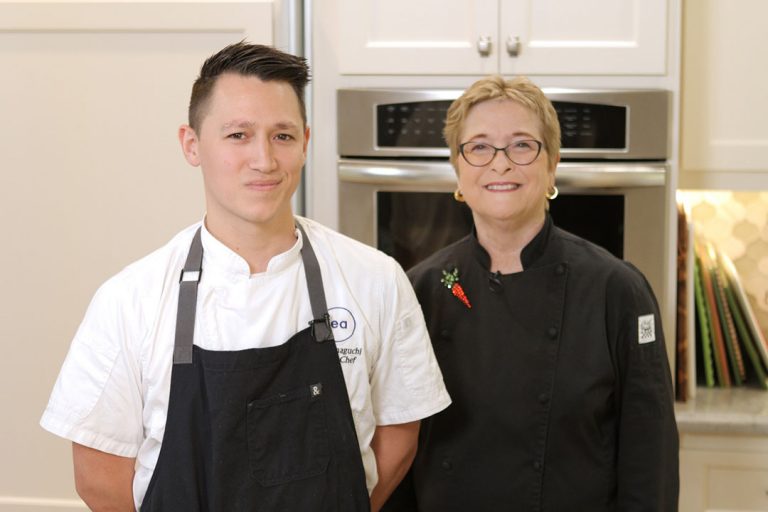 David Yamaguchi, executive chef at O Sea in Old Towne Orange, combines creativity and pinpoint focus. His seafood-centric dishes use flavor profiles that are deliciously balanced and imaginative. Every element is thought out to please the palate, as well as the eye.

His love of cooking started early. Growing up in Los Angeles, instead of watching cartoons with his brother, he watched the Food Network from the age of 8 or 9. Chef Ming Tsai’s “East Meets West” was his favorite show. Often, he watched the same episode several times. His sister became an early fan, challenging him to create dishes using five ingredients from their kitchen cupboard.

After graduating in 2009 from Le Cordon Bleu at the California School of Culinary Arts in Pasadena, Yamaguchi spent time mastering the art of sushi before joining the family of restaurants owned by King’s Seafood Company. He served as sous chef at Water Grill Santa Monica, tackling around 600 covers a night, before becoming instrumental in training cooks for the opening of Water Grill San Diego and Water Grill South Coast Plaza. More seafood-based kitchen experiences followed before he teamed with Mike Flynn to open O Sea eatery in the spring.

I was thrilled when he agreed to tape a culinary video with me in my home kitchen. At first, he threw around the idea of creating a new ceviche, a rendition themed to autumn. O Sea spotlights a seasonally inspired menu. After careful thought, he decided to stick with the oh-so-popular Salmon Ceviche with Coconut Leche de Tigre at O Sea. He knew that more than likely, if the irresistible dish disappeared from the menu, adoring guests would holler. Disappointment would reign.

Where the seafood is caught or farmed in important at O Sea. Norwegian farmed salmon is at the heart of the dish, but it’s the coconut leche de tigre that makes it beyond delicious. It translates as “tiger’s milk,” but there’s no large cat species involved in its preparation. It’s the citrus-based, spicy marinade used to cure the fish in classic Peruvian ceviche. His blender-whirled version teams coconut milk with fresh lime juice, shiitake mushroom dashi, garlic, and ginger, plus a smidgen of fish sauce.

The coconut leche de tigre and bite-sized pieces of salmon meld with avocado, Fresno chile, Maldon sea salt flakes, Ninja radish, red onion, and mint. It’s a “quick cure” of sorts, just requiring a minute or two for the flavors to marry. Mounded into a shallow bowl, the “leche” forms a low ring around the mix; four or five eyedropper-formed dots of bright habanero oil pattern the surface. Off to one side, a few crunchy taro chips tangle into an upright bundle. A pinch of micro cilantro adorns the top.

Yes, it’s so very delicious; I would be happy to eat this ceviche every day.

Favorite Knife: The short-bladed cleaver he bought at a tiny shop in Alhambra in 2008 is a treasure. It was reasonably priced for a culinary student at about $50.

Kitchen Wisdom: Never burn bridges. Everyone knows everyone in the culinary world.

Secret Talent: He loves the stress of the professional kitchen. The long hours, too. His methodical nature helps him plan preparation procedures and techniques in advance, step by step.

Drink of choice: Negroni, or a good whiskey, neat (such as Noah’s Mill—it’s not crazy expensive but very tasty). 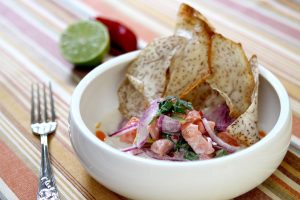 1/4 ripe but not squishy avocado, diced

Cook’s notes: Shitake mushroom dashi is available at Japanese markets or online. Chef used a made-in-house habanero oil in a small container equipped with an eyedropper. He says that you can use a store-bought habanero oil that is sold online and in some specialty stores.