Chef Ross Pangilinan is gifted with vision, talent, and guts. In late 2016, after seven years as executive chef at Leatherby’s in Costa Mesa, he opened Mix Mix Kitchen Bar in Downtown Santa Ana. The globally inspired eatery has garnered many prestigious accolades. 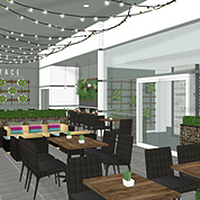 A second restaurant is in the works and projected to open in the fall. TERRACE by Mix Mix is on level 3 of South Coast Plaza’s Crate and Barrel/Macy’s Home Store Wing in the location previously occupied by zpizza. The restaurant will focus on well-priced, market-driven small plates. The cuisine will showcase Pangilinan’s eclectic style, which is influenced by French, Italian, and modern Filipino flavors. An approachable wine list will have varietals by the glass and bottle as well as rotating craft beers.

Some favorite dishes will make the transition, such as Mix Mix’s tostadas and pork cheeks, but most menu items will be different, such as prawns and seasonal vegetables just-right roasted in the pizza oven and served either with a velvety vegetable puree or butter gremolata. If Pangilinan includes his signature halo halo, a cold Filipino dessert, he says it will be closer to an authentic version.

True to its name, the restaurant will showcase full-service dining in a beautifully designed covered terrace to seat up to 66. The interior will accommodate another 19 to 24, with an additional area next to the escalator that will seat around 20. He describes the decor as “modern rustic.” A customized banquette with decorative tin tiles under the counter will be on display inside. Outside, overhead festoon lighting will illuminate succulents on wood trellises and planter boxes adjacent to tables.

For Pangilinan, the potential for alfresco dining was a big part of the location’s appeal. He says that about nine months after opening Mix Mix, he was itching to get back to Costa Mesa. He wanted to create a second restaurant there and says it was a no-brainer to take this opportunity.