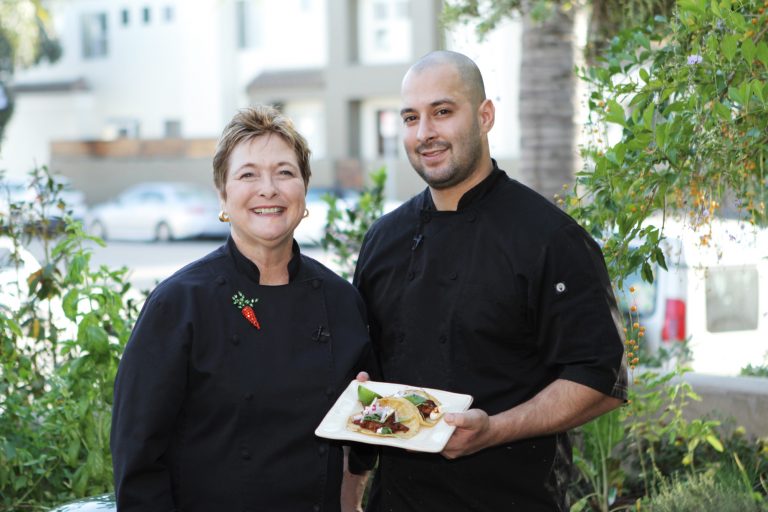 Cha Cha’s Latin Kitchen in Brea is a Mexican cantina with a frisky vibe. At the heart of its allure are the boldly-flavored dishes and handcrafted drinks. The menu showcases unique twists on Latin American cuisine, modern takes on everything from wood-oven roasted Jidori chicken spiked with Yucatan spices, to the decadent caldo with a saffron-tomato broth rich in fresh seafood and toasted angel hair pasta.

The Guajillo Braised Short Ribs are a favorite. Joseph Martinez, Cha Cha’s chef de cuisine, slow-simmers the meaty bone-in beef ribs in a made-from-scratch tomato based sauce accented with Guajillo and arbol chilies. Tender and spiced with a just-right amount of ground cloves, cinnamon and cumin, Martinez uses the tender rib meat in a several dishes, including open faced enchiladas and tacos. Both of these dishes are garnished with crumbled goat cheese, arugula and crisp radishes.

Martinez, bless his heart, agreed to share his recipe and show the step-by-step procedures for preparing his luscious tacos. In the video that we taped, he explained that when he makes the ribs at home, he cooks them in for six hours in a slow cooker, rather than braising them in the oven. Slow and easy. Home-style.

A graduate of the Le Cordon Bleu in Pasadena, Martinez started working the line at Cha Cha’s many years ago and in the process worked his way to the top with hard work and culinary creativity. His oh-so-popular Chipotle Honey Glazed Salmon along with those irresistible beef ribs became integral to the restaurant’s menu. Learning to trust himself was essential to his professional growth.

He lives in Brea with his wife Michaeleen and their infant son Ezra.

Secret Talent: He is a pen and pencil artist, drawing a wide variety of subjects. He started drawing comics as a child.

Home Pantry: Tortilla chips, Jalapeno Kettle Chips and El Pato hot sauce are always at the ready at his house. The ingredients for chilaquiles and enchiladas are always on hand. Cook’s notes: For home entertaining, if desired the sauce and ribs can be prepared two days ahead and refrigerated.

Limes, halved or cut into wedges