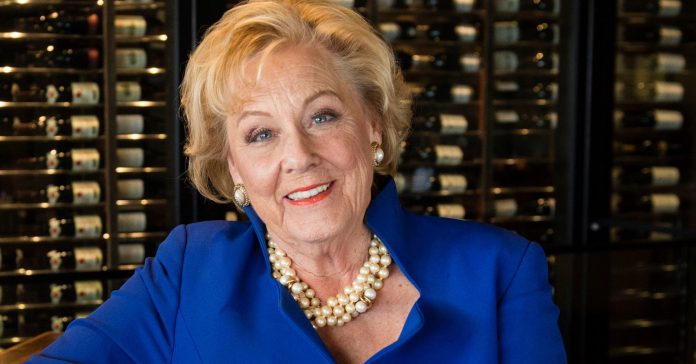 Phyllis Ann Marshall passed away peacefully on August 23, 2017 at her home in Costa Mesa. Along with her love for family, her life was dedicated to food and hospitality. She treasured everything the restaurant industry encompassed. Her career included a longtime stint as restaurant critic for Orange Coast Magazine.

Phyllis Ann was born on December 16, 1936 in Amityville, New York to George Fleming and Elsie Ireland Yates. Her grandfather worked in New York City and took great pleasure in taking his young granddaughter to many of the city’s restaurants. She would overhear conversations about the ins and outs of the restaurant business and debates about the quality of the food. Eventually she engaged in those discussions, asking questions. Those early restaurant experiences were the catalysts of her never-ending curiosity about all things related to the industry, both in the kitchen and in the dining room.

She lived a full life. After graduating from Cornell University with a Bachelor’s of Science in Food Chemistry, she attended culinary school at La Varenne Ecole de Cuisine in France (where she worked with Julia Child) and Le Cordon Bleu in London. A driving force in the evolution and elevation of the Southern California restaurant industry for more than 40 years, Phyllis Ann was recipient of many awards, including the Pacesetter Award as Entrepreneur of the Year. She founded the Restaurant Management Program at the University of California, Irvine.

She was a proud member of Les Dames d’Escoffier International, a group dedicated to women working in the food industry. She planned events for the organization and encouraged networking, helping members realize their dreams, offering advice and helping to develop work strategies. Her dedication also included memberships in the National Restaurant Association, Food Service Consultants Society, and Chaîne des Rôtisseurs.

Many will remember the beguiling cooking classes and culinary tours she conducted after co-founding Mr. Stox Restaurant with Chick, Ron, & Debbie Marshall. When Chick and Phyllis Ann divorced, she moved to Orange County and founded FoodPower, Inc., which she owned and operated for the past 33 years.

FoodPower is a restaurant consulting business designed to maximize success. She applied her skills to examine every detail of client’s restaurant, studying the concept and brand, lay-out and use of space, as well as the food, menu and service. It was her dream that FoodPower would live on after her death. Happily, she realized that goal. Her longtime colleague and consulting partner, Greg McNally, will be taking the helm at FoodPower.

Phyllis Ann touched the lives of so many. She was always positive and eager to help those she encountered. She was a believer in harnessing inner power and “going for it!”

Britta Kvinge Pulliam, fine wine specialist and former chef-owner of Britta’s Restaurant in Irvine, says that Phyllis Ann always cheered her on, and lent that encouragement to every female chef in Orange County, a small group in the 80’s and 90’s.

“She was the glue that kept our culinary family together,” she said.

“Phyllis Ann had a big heart and equally large personality,” said Mona Shah, owner of Moxxe Public Relations. “Her laugh was infectious and spread her positivity to all around her.”

Indeed, Phyllis Ann loved life and lived it well. The Orange County food community will remember her with great love and affection.