Why learn how to make Italian risotto from an Irishman? Because my pal Sully was a master at studying a subject and then perfecting the process. If I had to choose one dish to live on, it would be Sully’s risotto. His version of this trendy Italian rice dish was so delicious that one spoonful was enough to convince you only Italians really understand true comfort food.

The smell alone is seductive, as the starchy scent of rice melds with broth and cheese.
His asparagus-spiked risotto is a favorite. For me, the grassy, nutty-sweet flavor of asparagus makes it the perfect choice. Sought out as a delicacy in ancient Rome, asparagus is also one of the most nutrient-dense foods on the planet.

For Sully’s risotto, the asparagus lends its personality in two forms. The tips, attached to a small portion of stalk, are reserved for an end-game addition. The stalks are cut into smallish pieces and go into early-stage preparation, added when the white wine cooks down au sec with the onion and Arborio rice. I like to add a little twist of my own, a small garnish of crunchy crumbled fried prosciutto. I dub it “prosciutto dust.”

Michael Sullivan, known to all as “Sully,” knew risotto was best served immediately, before it lost any of its creamy smoothness. This hitch could discourage cooks who want a party dish that can be made before the company arrives. It wasn’t a problem for Sully. The last-minute preparation was part of the Sully entertainment package. Guests, limited to four, gathered in the kitchen to watch as my old college pal sautéed, stirred, and simmered. His large hands made the cooking equipment look doll size. In the 1960s, this mountain of a man was an All-American USC water polo goalie with a 74-inch wingspan.

He married my beloved college roommate, Ania. That was many, many risottos ago. 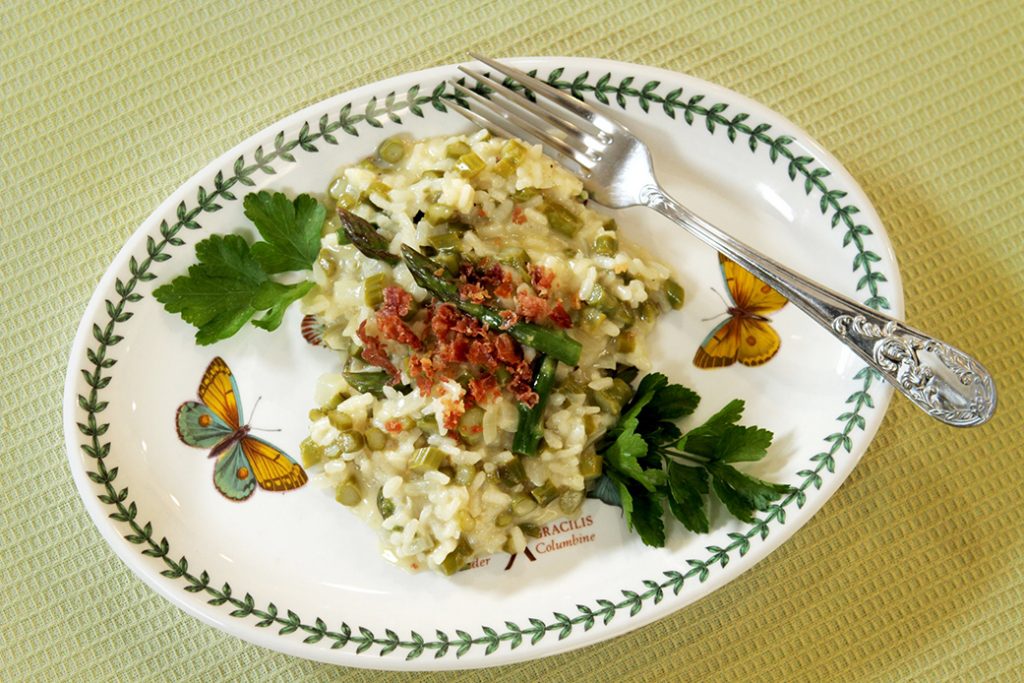 Cook’s notes: To make prosciutto dust, heat 1/2-inch of canola or vegetable oil in a medium deep skillet on medium-high heat. Add (in batches) about 3 ounces of cut into 4-inch imperfect squares prosciutto and cook until it turns dark brown and curls up on the ends. Drain on paper towels. Cool and crumble into small bits.

2. Bring the broth to a boil in a medium saucepan; reduce heat to a slow simmer. Place a ladle next to the saucepan.

3. In a large, wide saucepan or Dutch oven, melt butter on medium-high heat. Add onion and cook, stirring occasionally, until onion is transparent, but not browned. Add rice and stir rapidly to coat rice with butter. Add asparagus stalks (either thinly sliced or finely chopped) and wine. Allow wine to evaporate.

4. Add 1/2-1 cup broth, so that the rice is barely covered with liquid. Stirring frequently, allow broth to evaporate and be absorbed. Don’t allow the rice to go completely dry. Repeat, adding broth in 1/2 cup measurements, until 1 cup of broth remains to be added to the rice.

5. Add the asparagus tips and finish adding broth 1/2 cup at a time. When all the broth has been absorbed, remove pan from heat. Immediately stir in whipping cream, Parmesan cheese and, if using, the butter. Add salt and pepper to taste. Divide among 4-5 bowls. If desired, sprinkle prosciutto dust on top and add pea shoots. Serve immediately. 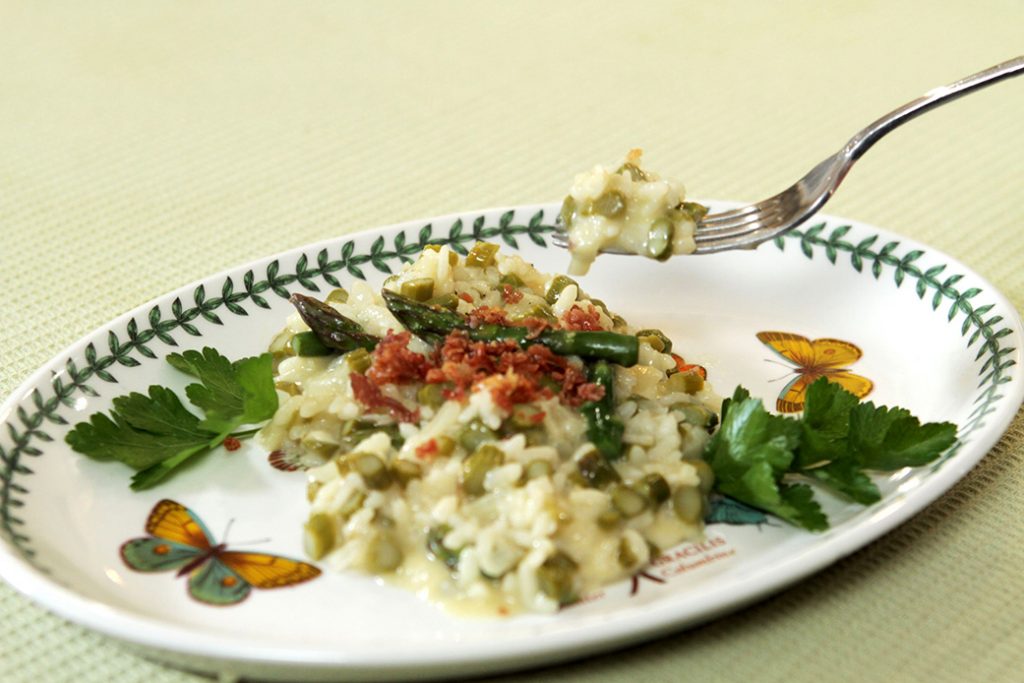