Zachary Geerson, executive chef at Journeyman’s Food + Drink in Fullerton, Orange Coast Magazine’s 2019 Restaurant of the Year, uses his talent to create dishes that are innovative and irresistible. With a firm footing in classic techniques mastered at The Culinary Institute of America at Hyde Park, New York, he showcases alluring twists that bump up flavor and provide stunning presentations.

He describes Journeyman’s cuisine as “progressive American,” with progressive defined as what is coming up next, not in terms of flighty trends but what is right for the restaurant.

“For example, in 2018, fermentation took a huge step forward,” he explained. “Chefs started focusing on that. We jumped on that train, but we tried to use it in a way that spoke the language of what we wanted to be.

“American, a more eclectic term, describes the melting pot of what we have in our country. It’s also looking at what is around us, seeing what ingredients our local terroir offers. Sometimes people associate those words with molecular gastronomy … We do some, but we’re not an avant garde restaurant like el Bulli was.”

When asked about molecular touches that he recently concocted, he spoke about a powder that he made from dehydrated pickled strawberries. It was used as a seasoning dust on an umeboshi-style green lollipop. 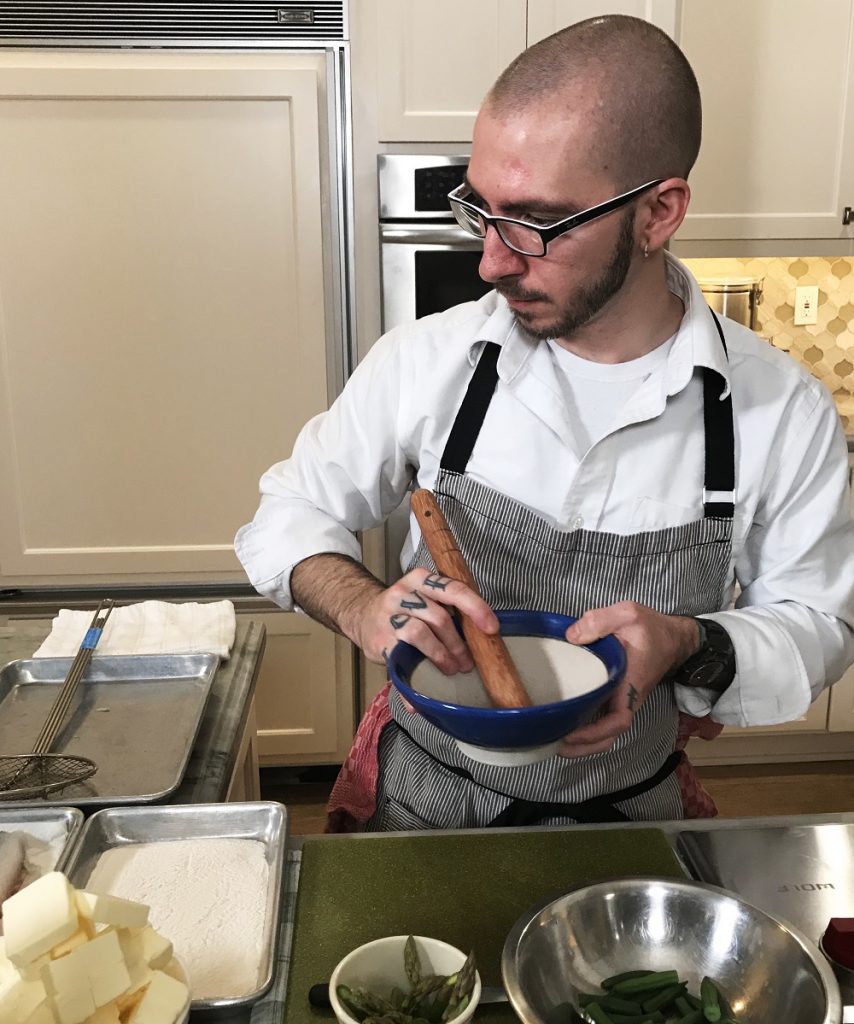 In my home kitchen, he prepared pan-roasted branzino fillets accompanied with sides and sauce reflecting a classic French point of view. The vegetables, blanched-until-tender-crisp asparagus and green beans, were tossed with a lemony vinaigrette. A thyme-infused beurre blanc complimented that crisp-coated fish, giving it a luxurious oomph; he strategized that the white butter sauce could be partially made in advance.

Asked how he might change the dish for restaurant service rather than a home-style approach, he said that one option would be to skin the branzino fillets and season the belly side of the fish with salt, lemon zest, thyme, and fennel pollen; the fillets would be sandwiched in different directions head to tail and enclosed in plastic wrap. Poached quickly, they would be almost like a branzino torchon. The skin would be baked between two silicone mats to be crispy like a fish-skin tuille. Asparagus would be used to create three textures; an asparagus flan, a beautiful asparagus bisque, plus a salad of shaved raw asparagus (jumbo size are used for shaved curls). Instead of beurre blanc straight-up, they would do a milk infusion flavored with unusable ends of the asparagus. With a foaming agent, he would create a little foam, so the plating would be reminiscent of seaside foam.

An artist’s vision plays a part on the plate, balanced with steadfast culinary skills. His passion for cooking shines. Read the tattooed truth on his fingers; one direction it’s “food love,” the other reads “love food.” Indeed. 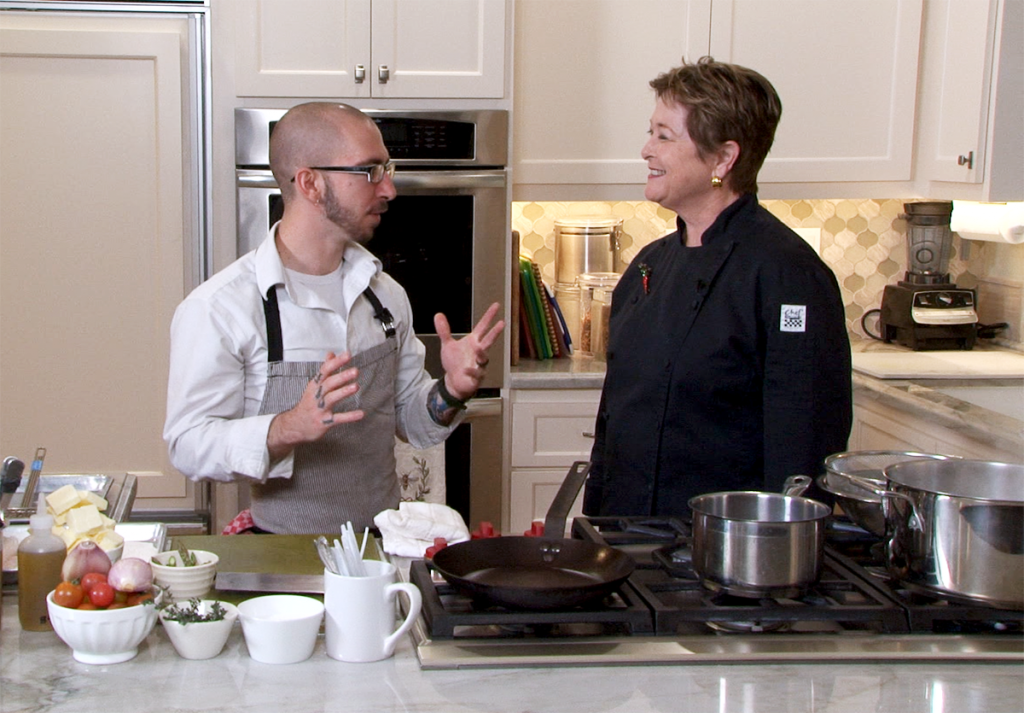 Kitchen Music: Geerson says that music played in the kitchen is very freeing. He has the staff play music whether it’s their own or something he picks. He likes to listen to tenor Andrea Bocelli, or compositions from Mozart or Bach. The blues styling of guitarist Joe Bonamassa make him feel every note. The staff feeds off chef’s joyful vibe.

Artistic Dance Man: Before he was a chef, he was a breakdance and hip-hop instructor for adults and children in Fort Myers, Florida. At 8 or 9, he learned by watching videos on TV. In those early years, he also shined at drawing and watercolor painting, plus found time to sing in the church choir.

Mentor: Early in his career, he worked in Florida with Chef Harold Balink, the owner of Cru, an American-French restaurant. Balink, very tall and intimidating, was consistently calm. He sat down Geerson and told him he had two weeks to prove himself, then started dictating recipes from his head. The image that stays with him was the recipe for Blueberry Goat Cheese Cheesecake pulled spontaneously from the chef’s noggin, where all his recipes resided. He still makes versions of that dessert.

Dream Project: A 20-seat no-menu restaurant cooking with his wife Olivia. His reputation would instill trust and guests would allow the kitchen to cook what they thought was best. They would live above the restaurant.

Journeyman’s Food and Drink is at 1221 E. Burton St., Fullerton. See the menu at journeymanfood.com. 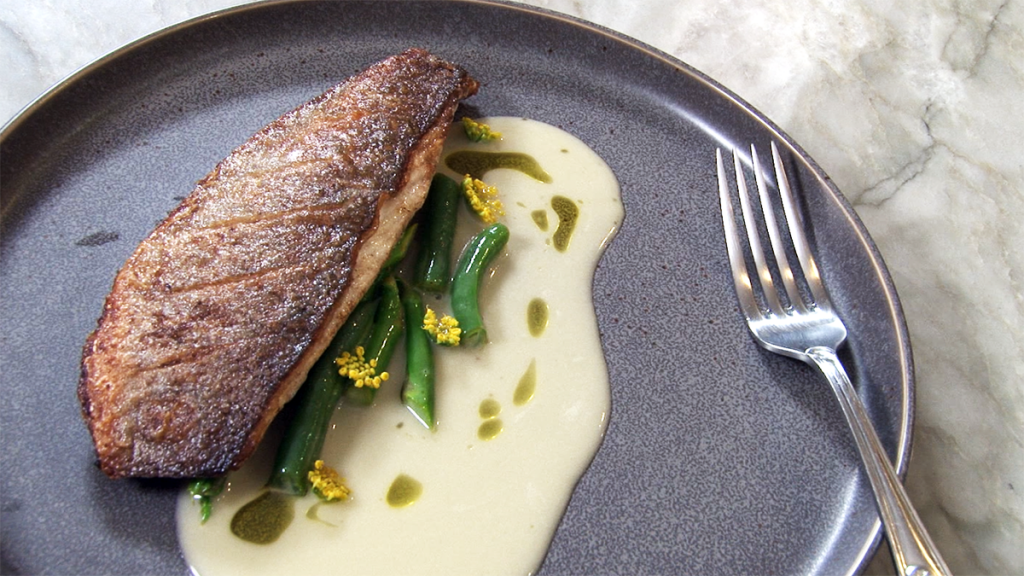 For cooking branzino:
Wondra flour for dusting
Salt, optional fennel pollen, optional Espelette pepper
Unsalted butter
2 skin-on branzino fillets, pin bones removed (ask your local fish supplier to cut your fish into fillets with the scales and pin bones removed, or try it yourself at home), scored on skin side at 1 3/4-inch intervals