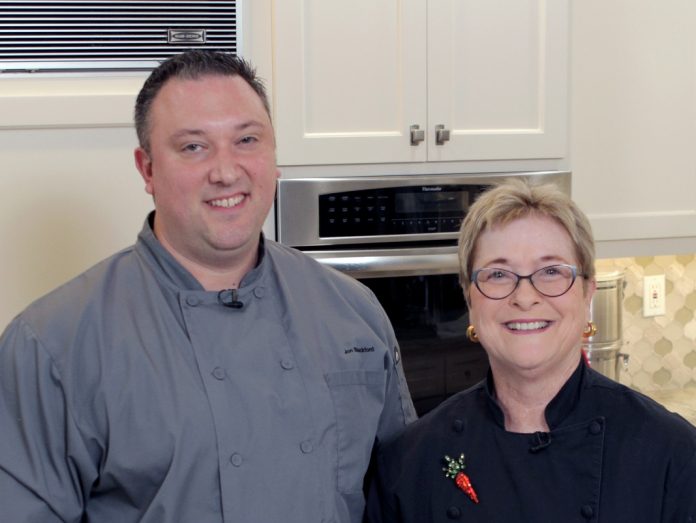 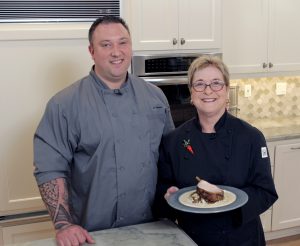 Imagine opening a restaurant in the middle of a worldwide pandemic. Courage, creativity, and talent would be required. Jonathan Blackford, former executive chef at A Restaurant and CdM, has all those attributes. They were imperative when he opened his own eatery, Fork and Knife in Costa Mesa, in October 2020.

Although it wasn’t his original plan, the restaurant specializes in to-go fare, made from scratch meals using the best ingredients. Many of the dishes are designed to be reheated at home, a nonexistent concept for a fine-dining chef. Blackford’s culinary background includes early stints in the kitchens of some of the best restaurants in America, including Gramercy Tavern in New York City and Blue Hill at Stone Barns in Tarrytown, N.Y. These restaurants and those that followed were places where the staff could feel assured that dishes would be promptly served; reheating refrigerated meals would be unimaginable.

Dubbing it a new adventure, he had to tweak methods to make fully cooked grab-and-go dishes moist and flavorful when warmed up in his customers’ home kitchens. He developed low-and-slow protocols for roasting meats, often using his Alto-Shaam smoker to boost flavor. Brining contributes to stay-moist textures, as well as adding a just-right saltiness.

Dishes that required breading, such as Chicken Piccata, would require an altered mix of ingredients to maintain crispness and avoid sogginess. A combination of cornstarch, rice flour, and all-purpose flour did the trick.

Sauces such as beurre blanc, a delicious concoction that is renowned for troublesome “breaking” when reheated, needed a total redo. Yet it had to taste like the beloved French butter-based sauce. He describes the challenging discovery process as fun, ending up using much more liquid than the classic method and drafting a high-speed blender to master the texture.

He joined me in my home kitchen to share the secrets to preparing his low-and-slow pork rack, a brined four-bone beauty that was truly one of the tastiest pork loins I’ve ever tasted. It takes patience and planning. First it needs time to brine, 12 to 24 hours in the fridge. Next, it roasts for two to three hours in a 200-degree oven, just until it reaches 137 degrees.

Cut into chops, the pork is served with a colorful succotash that showcases corn and Christmas lima beans along with cilantro, lime juice, and, yes, butter. A drizzle of creamy hatch chile sauce circles the plate, smooth with a nice touch of spicy heat. Divine, truly divine.

Restaurant Picks: I was blown away by Rustic Canyon in Santa Monica, for the food, the service, and the culture. Grammercy Tavern (New York City) is another favorite.

Favorite Knife: It’s a Kohetsu HAP40, made in Japan from a blended steel that is incredibly hard, and the edge is laser finished. It holds an edge better than any other steel. I now store it in my office for safe keeping.

Veg Reveal: Turnips are underutilized and don’t get the appreciation they deserve. Oven roast them, then sauté with the greens in butter, salt, and pepper.

Few Know: I love Disneyland—for people-watching and for taking in the tiny details that are put into everything. I love the corndogs, not at California Adventure, but on the way out of Downtown Disney at a cart close to the Lego dragon where they hand dip in a panko batter and fry to order.

Drink of Choice: I’m a beer person. Used to be into craft beers, but now I like Corona Familiar or a Japanese beer such as Asahi.

Culinary mentor: I’ve learned something from every chef I’ve worked with … even the worst one, who taught me what not to do. My dad taught me morals. Chef Marco Pierre White has always been a big influence.

Fork and Knife, 401 E 17th St., Costa Mesa. In addition to the grab-and-go fare, there are 16 seats for in-house dining. forkandknifecm.com

For searing: 1 tablespoon neutral oil, such as grapeseed oil or canola oil

Dollop of sour cream if mixture is too spicy

Cook’s notes: Christmas lima beans are from Rancho Gordo, a company in Napa that specializes in dried heirloom beans. Uncooked these beans are white and maroon; when cooked that are a rich mahogany color.

Cathy Thomas is an award-winning food writer and is the author of three cookbooks: “50 Best Plants on the Planet,” “Melissa’s Everyday Cooking with Organic Produce,” and “Melissa’s Great Book of Produce.”