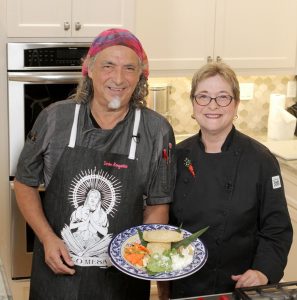 You can forget the kid’s version of quesadillas, those last-minute emergency meals made of heated tortillas and cheese. Chef Ivan Calderon makes vegetable quesadillas far from the expected, thoughtful blueprints that reveal irresistible flavors and textures. The quesadilla’s shape is a surprise as well, an empanada-like fried turnover encased in his special tortilla dough.

As you might expect from Calderon, the founder and owner of Taco Rosa and Taco Mesa restaurants in Orange County, his corn tortillas are made from scratch. The gift, and it is a tasty one, is that he adds mashed potatoes to the fresh corn masa, a flavor marriage that is scrumptious.

Inside the dough is a filling made of 1/4-inch-diced vegetables sauteed with fresh serrano chiles; the frisky mix is augmented with a mix of Oaxaca and pepper Jack cheeses. Once folded and fork-tine sealed, these beauties are fried and served with guacamole, house escabeche, and sour cream on the side. Move over meat, these quesadillas are a vegetarian dream come true.

Along with his passion for delicious cuisine, he is recognized for his gregarious warmth and generosity. He credits restaurant pioneer, the late Larry Cano, with encouraging his career. Calderon was studying in the food and beverage program at Orange Coast College, when Cano recognized his talent and spent time talking to him about the hospitality business. Cano placed him in positions to help him flourish, making him assistant manager at Mexican restaurants opening in cities around the country. His take-away advice? Surround yourself with talented people. Look at successful restaurants and observe what is unique about them.

He did and adapted what he saw with a goal to made it even better in his own restaurants.

Dream Come True: Plans are in place to open a new drive-up concept, Taco Mesita, in Old Towne Orange next spring. It will feature slow-cooked dishes in a quick-service environment.

Restaurant Faves: Oceans & Earth, Yorba Linda, because I like the care and detail that they put into their dishes.

Soccer fan: We have soccer tournaments with other restaurants, such as El Ranchito or Mother’s (Markets). Taco Mesa usually wins.

Secret talent: I play acoustic guitar. I’m a ’70s guy—everything from the Animals to James Taylor to Bob Dylan.

Collector: I collect art with ancient, religious themes, such as altars. I like learning about ancient religions.

Here is the recipe for chef’s delectable quesadillas. Yes, it is from scratch. Yes, it is a project, a pretty big one. Yes, the escabeche (pickled vegetables) must be made in advance, so start with that. You will have enough leftover escabeche to accompany an endless number of dishes, everything from scrambled eggs to pork chops. And it’s good to know that if making this dish  seems like the impossible task, you can find comfort knowing that it is on the menu at Taco Rosa Restaurants. 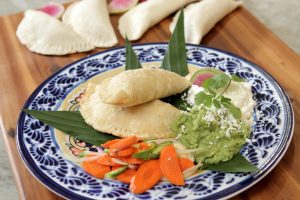 Ivan Calderon’s Vegetable Quesadillas
Yield: about 12, plus leftover escabeche (escabeche – can be halved, but leftovers are delicious)

1 fresh corn on the cob, grilled or roasted, kernels cut from cob

Cook’s notes: Serranos? The amount is up to you. Calderon doesn’t seed them or remove the veins. He loves it spicy-hot, so he uses a lot. Adjust the number of chilies to suit your taste.