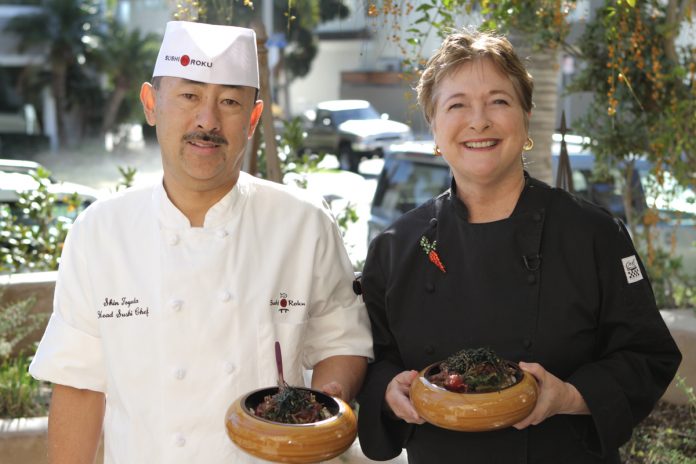 Shin Toyoda, head sushi chef at Sushi Roku in Newport Beach, isn’t a matchmaker. Yet he knows of five couples who met while eating his sushi, twosomes who later married.

I imagine that the taste and appearance of his tantalizing fare inspired strangers to chat, remarking about the refinement of flavors and the alluring texture contrasts, the colors and yes, the wow.

It’s understandable how guests could fall in love at his sushi bar. Patrons, no doubt, with discerning palates.

His poke (pronounced POH-kay) is an irresistible dish. The concoction has Hawaiian roots, but has become a very popular dish in Japan. It showcases jewel-like cubes of chilled raw big-eye tuna napped with a delectable Asian-themed sauce. Chef Toyoda builds on the basics, adding just-right ingredients that bring judicious spicy heat and appealing crunch, along with a worthy dose of umami.

Sushi Starts: He trained in Tokyo before coming to the U.S. 30 years ago. He says that he is still training, revealing that learning never seems to be finished.
Homework: He lives in Redondo Beach and often spends his time off fishing in a sea kayak. It’s a catch-and-release pleasure, the fun is more about relaxing and having time to think, rather than filling the fridge.
Roll Ups: Sushi rolls aren’t popular in Japan. He says that rice on the outside of those rolls doesn’t show the proper respect for the fish. Sushi hand rolls are preferred in his homeland.