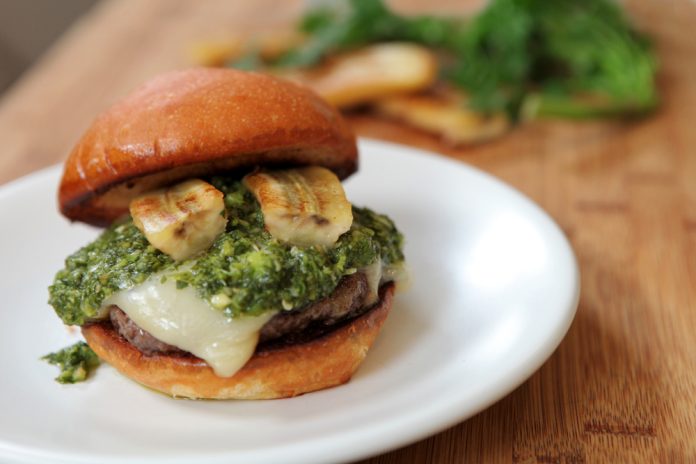 There’s so much to like about Andres Dangond, executive chef-partner at The Cut in Irvine. His warm smile. His amiable personality. His fascinating culinary history. And yes, his ability to create handcrafted burgers with such flavor perfection that the memory of them fuels unrelenting cravings. His juicy patties, a blend of 80 percent Angus brisket and 20 percent chuck, offer scrumptious beefiness. But it’s the flavor-balanced components accompanying the patties that make those burgers alluring.

Some prefer the Savory Cut that boasts bacon relish, Swiss Cheese, aioli, and 3000 Island Sauce (The Cut’s take on Thousand Island Dressing). The Colombian Burger is what I’m all about. Along with smoked mozzarella and caramelized banana, Colombian-born Dangond includes cilantro-based aji, a sauce so delightful it’s said to have been part of the cuisines of Andean countries (such as Bolivia, Colombia, and Peru) since the time of the Incas.

The sauce varies from person to person, region to region, but I can’t imagine anyone making a more tempting concoction than his; green onion, fresh lime juice, garlic, jalapeno, and a little water are whirled in a blender along with an ample amount of cilantro. The bright green mixture rests a while for the flavors to meld before it is used as a topping. It’s delicious atop chicken, pork, steaks, or roasted veggies, as well as a well-seared patty.

“Aji is a dressing that is a little spicy, a little acidic, it’s a delicious thing,” he says. “We put it on almost anything (in Colombia). It is like our ketchup.”

Although his burgers are sublime, he honed his culinary skills on much tonier menus in Chicago, where he worked in the kitchens of two prestigious Michelin-starred restaurants, Alinea and L20. He cooked in Colombian restaurants for eight years before moving to Chicago but says that his time in the Windy City was an awakening.

“Both restaurants were three-star Michelins, but were completely different in their approaches,” he says. “Everything that I thought about cooking went out the door. It was very humbling. There was a new standard of perfection. The first day they had me brunoise (dice precisely and very finely) an onion; it took me three hours to get it right.”

The Cut launched in 2014 as a food truck before opening its brick and mortar location in summer 2017. In addition to burgers the menu includes Smoked Chicken Wings, Serrano Ham Croquettes, Smoked Mac & Cheese, and decadent desserts. Craft beer, wine, and enticing cocktails are also available, Secret Talent: Before deciding to be a chef, he wanted to be a singer. He studied at a music school in Barcelona, Spain that specialized in classic jazz. He aimed to be a rock singer but says that his voice wasn’t raspy enough, plus he was too shy. Now he satisfies his music-loving heart by singing when he cooks.

Best Advice: According to his dad, there are two important rules to live by. First: On time means arriving 15 to 20 minutes early. Second: always under promise and over deliver.

Drink of choice: He loves to slowly enjoy a good smoky scotch rocks, but adds that red wine is high on his list as well.

Cut’s cut: He doesn’t use fancy, pricey knives. He says the most important thing is to keep the blade razor sharp. Often, he uses a $20 OXO knife from Target—sharpening it every week on a stone, then passes it on a steel. Bingo. 1/4 of a banana, sliced in half lengthwise