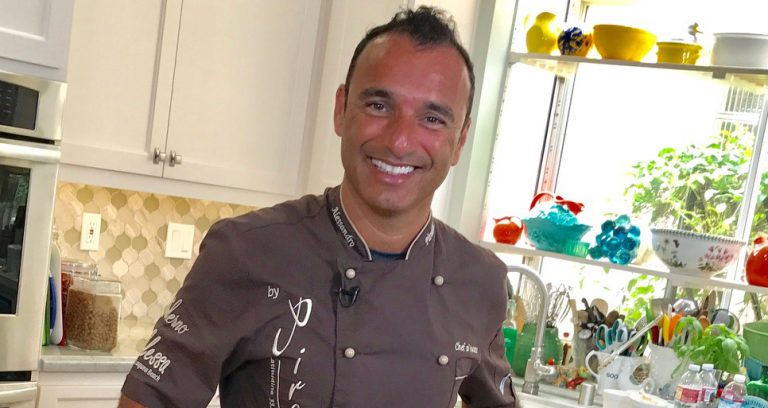 He showcases the mild-mannered fish in different ways in each of his restaurants (Alessa By Pirozzi and Salerno by Chef Pirozzi in Laguna Beach, as well as Pirozzi Corona del Mar).  I like them all, but my very favorite is his Branzino al Piatto at Salerno. A boneless skinless filet is lightly pounded and quickly cooked on a plate. The straight-forward way it is broiled lets the delicious taste and texture of the fish shine through. Then he adds garnishes that dazzle the eye with pure colors that are reminiscent of a Henri Matisse painting. There’s a drizzle of Calabrian chili oil, a sprinkling of black salt flakes and honey-colored spheres of olive oil pearls. A scattering of tiny pickled sweet peppers, rounded at one end and sharply pointed at the other, offer a pleasing contrast. A gentle squeeze of fresh lemon juice brings vibrancy, while a pinch of fennel pollen and a higgledy-piggledy arrangement of diced avocado bring richness.

Thinly sliced rainbow radishes and carrots grace the lip of the plate, along with a couple of crisp crostini. Confetti flowers, small edible petals in a wide variety of colors and shapes, flutter atop it all.

Pirozzi says that the colorful flower mixture is the “parsley of the future.”

With his signature gusto, Pirozzi showed me every step of the preparation. The dish is very doable at home. The long list of garnishes can be shortened, but be sure to include something spicy, something sweet, and something salty. Fondest Food Memory: At the age of four in Naples, Italy, Pirozzi started helping his mother, father, grandmother and sisters can tomato sauce. He says that because the children’s fingers were small they were especially helpful with the summertime canning of San Marzano tomatoes. Their tiny digits were better at pushing tomato wedges and basil leaves into the dark liter beer bottles that were collected all year for the project. The bottles were capped off and wrapped in newspaper before cooking. The amazing sauce was used all year, adorning pasta, chicken and steak.

Best Restaurant Meal: Conca dei Sogni (Cove of Dreams) on the Amalfi Coast of Italy near Positano was the restaurant source for his favorite. It is in a tiny bay that is only accessible by boat. You can jump off your chair into the crystal blue water. The seafood is stored in the water and much of the shellfish is harvested right before it is cooked and served.

Secret Talent: He is a pilot. He likes to fly power gliders and small airplanes. His favorite is his 182 Skyline, white with a gray and a red stripe.

Artistic and Handy: He loves to weld and create something out of nothing. He cuts the metal, then bends it and welds it together. He made all the wine racks and many art pieces in his restaurants’ dining rooms.

Collections: He collects salt, honey and extra-virgin olive oils from around the globe. Cook’s notes: Jars of Tutto Calabria Hot Long Italian Chili Peppers in Oil are available at www.amazon.com; you can use the oil (just a small drizzle) and a sliced chili in this recipe). Black salt flakes, fennel pollen and olive oil pearls are also available on the Site. I found the small sweet peppers in the cheese section at Bristol Farms Market in tiny jars (labeled “petite poivrons”).

To make crostini, preheat oven to 350 degrees. Arrange thin slices of baguette slices on rimmed baking sheet; brush both sides with extra-virgin olive oil, and season with salt. Bake until golden, 10 to 15 minutes, rotating sheet halfway through (if undersides are not browning, turn crostini over once during baking).