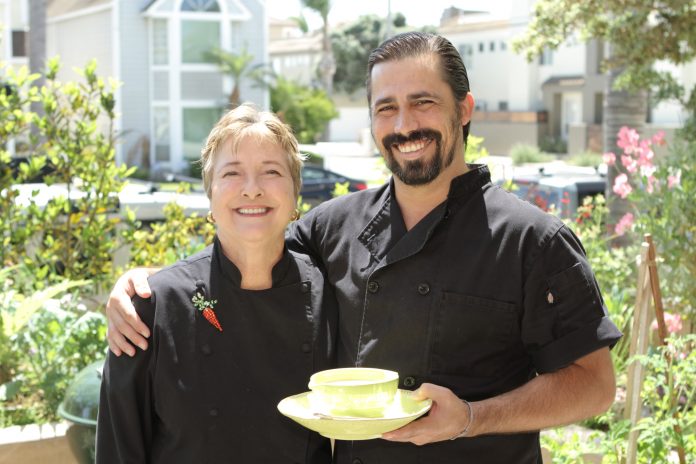 The ingredient list puzzled me. I’ve made hundreds of pureed soups, showcasing everything from asparagus to zucchini, most often including dairy products (cream, yogurt or milk) to achieve lush texture and taste. Often, just before serving, an egg yolk liaison came to the party, dealing out additional richness as well as a perfect consistency.

Cooking with Zach Layton, executive chef-owner of Babette’s in Newport Coast, opened my eyes to a vegan approach. His Truffled Cauliflower Almond Soup won me over. Quickly cooked without much fuss and then processed until smooth in a high-speed blender, the almonds complemented the vegetables lending both subtle nuttiness and an alluring silky mouthfeel. The garnish, a drizzle of truffle oil plus a generous pinch of toasted sliced almonds, offered just-right aromatic components to enhance the dish. Nix the dairy.

Layton is a master of clean cuisine, crafting from-scratch dishes using a mindful, whole food approach. Many dishes embrace plant-based ingredients, falling into the vegetarian or vegan camp. But carnivores won’t be disappointed with his sustainably sourced seafood and grass-fed meats, options that team with vibrant vegetable concoctions such as oven-roasted broccolini with garlic and dried chili or crisp-tender stir-fried green beans. The beguiling rib-eye is served atop a generous bed of verdant rapini.

Babette’s is a spinoff of the East Hampton original, a restaurant founded 21 years ago by Layton’s mother, Barbara Layton. He says that his mother is a great cook, but also credits other family members with influencing his palate and culinary talent. His parents met when working together at the restaurant where his father, Daniel Van der Beek, was chef. It was a ground-breaking eatery in the New York City’s West Village in the 70’s and 80’s. It specialized in vegetarian cuisine.
No wonder his cauliflower soup is so delicious.

Knife life: Whether attacking a head of cauliflower or cutting “protein,” he loves his simple offset serrated knife, praising it for its utilitarian practicality. He loves his dad’s Henckel knife, but says his $9 offset wonder is hard to beat.

Favorite eats: One of his favs is Gjelina in Venice, CA. He says that Chef Travis Lett makes vegetables sexy. His green garbanzos with mint, herbs and shaved pecorino cheese are irresistible – simple yet spot on. He also loves Playground in Santa Ana, admitting that he is a little envious of chef-owner Jason Quinn – because he creates new dishes every day and encourages guests to be adventurous.

Secret talent: He has the ability to instantly count letters. For example, say a sentence, such as “how do you do that?” He instantly knows that 14 letters make up that query.

Drink of choice: Green tea, a pick-me-up that gives him energy and well-being, plus he thinks it is beneficial to his creativity.

1. Place oil in a soup pot or Dutch oven on medium-high heat. Add onion and cook until softened, 5 to 7 minutes, stirring occasionally (do not brown).

2. Meanwhile toast almonds until lightly browned in a small dry skillet on low heat, stirring occasionally; watch carefully because nuts burn easily. Coarsely chop cauliflower florets; add cauliflower to onions and toss to combine. Add toasted almonds (reserving about 1/4 cup to use as garnish) and thyme leaves; toss to combine. Add water to cover by 1 inch. Bring to a boil on high heat; reduce heat to medium or medium-low and simmer until cauliflower is tender but not mushy, about 10 to 12 minutes.

3. Puree in batches in blender (high-speed blender works best) or food processor, adding salt to taste in the process. Pour into bowls. Garnish each serving with a small drizzle of truffle oil and reserved toasted almonds.