It’s hard to tell when the seasons change in southern California. At this time of year if you look hard enough, the signs are all there: pumpkin latte aromas fill the air, palm fronds litter the streets after gusty Santa Ana winds, and the beer aisle is full of fall seasonals.

Coming earlier and earlier every year, Pumpkin and Oktoberfest beers are what’s hot. Locally, there’s plenty to choose from, so dust off your yoga pants, ugg boots and festive lederhosen for these beers brewed right here in Orange County.

TAPS Fish House & Brewery – Pumpkin Ale: “We roast 100 pounds of pumpkin smothered in brown sugar and then leave them to steam and break down over night in the oven. We put that pumpkin in the mash the following morning and put pumpkin purée in the boil. We will be serving our pumpkin ale on nitro as well as CO2 this year.” – Kyle Manns, head of brewing operations at TAPS.

The Bruery – Autumn Maple: Brewed with 17 lbs. of yams per barrel, this is a different take on the “pumpkin” beer style. Brewed with cinnamon, nutmeg, allspice, vanilla, molasses, and maple syrup, it’s a rich, earthy beer that is complex and perfect to share at 10% ABV.

Oktoberfest beers are traditionally German-style lagers, whereas American brewers focus on the original Märzen beer which is a bit darker, less hoppy and has notes of toasty bread. Newer Munich-brewed German Oktoberfest beers are very light in color with a pronounced noble hop (floral/spicy) note and cracker-like maltyness.

Cismontane Brewing – Buckwheat Oktoberfest: The brewery hosted a mountain bike ride in the foothills to pick wild California Buckwheat for the beer. The plant offers up some earthy-honey notes to the beer, which is very easy to drink.

Anaheim Brewery – Oktoberfest: Legend has it the 100 year-old beer recipe was found in the basement of the historic Paulaner brewery in Munich, Germany. Anaheim’s version follows this classic Oktoberfest Marzen recipe with Munich malt, noble hops and a clean-finishing house lager yeast. It’s will be toasty, bready, and crushable throughout Fall. Release is Aug 30th at 5pm.

Barley Forge Brewing Co. – Dog Days Oktoberfest: Available now, this crisp, copper fest-bier is all about ushering out the dog days of summer. I highly suggest pairing it with Barley Forge’s beer Brats! 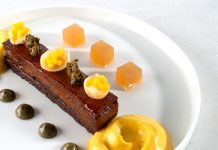 Here Is Our 2020 Dish of the Year From Marché Moderne 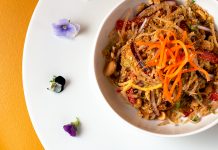 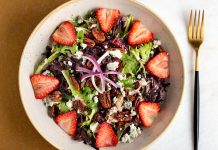