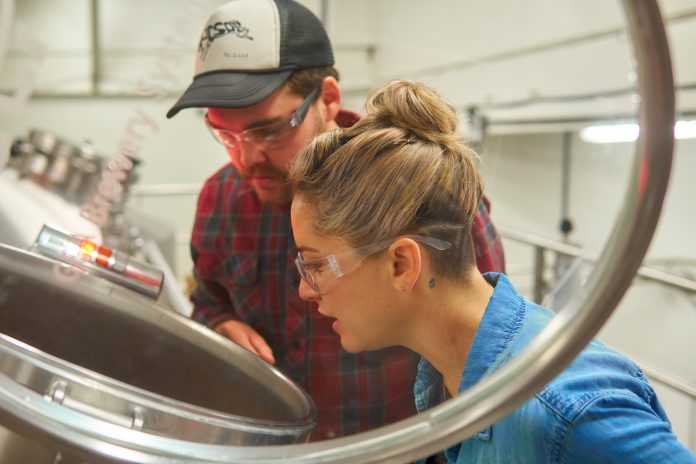 When chef Brooke Williamson won last season’s Top Chef, I doubt she envisioned herself standing on The Bruery’s German stainless steel brew deck, brown rubber Xtratuf unisex boots up to her knees, hand-scooping bags of almond flour into the mash tun among 150-degree heat. But there she is, arm tattoos and safety glasses, ready to put her concept beers into multi-state production.

“Pour it in higher,” I ask while shooting video, envisioning some reality TV cymbal-roll, percussion effect over dramatic music. “Seriously?” she snaps back…” yeah, have fun with it, it’ll be in slow-mo,” I say reassuringly.

Despite the emotional rollercoaster of a hit Bravo TV kitchen reality show, the day couldn’t be less dramatic. Part of me wished local chef Shirley Chung, who Brooke beat in the season-14 Top Chef finale, would pop out from behind a fermenter and somehow sabotage the beer. THAT would make for a great video. As with any collaboration, the hours are filled with jokes, fermenter beer tastings, and no matter what the level of experience as a brewer or chef, something educational. The Bruery’s facility is unique to the rainbow of beer styles and I highly recommend a tour if you’ve never been.

Post Top Chef-life is much different from her early days, “most of the cooking I do now is for my son, Hudson,” she confesses. The majority of her time is spent doing the public relations circuit with travel, appearances, demos, and such. Brooke and husband Nick Roberts have several beer-friendly beach gastropubs in L.A., including the Hudson House in Redondo (named after their son), Playa Provisions, and The Tripel; both in Playa Del Rey. The first collab beer, Girl Grey, is now fermented, quality tested, and packaged for public release on Feb. 14. The beer is made with lactose, almond, Earl Grey tea, and natural flavors. It’s very Belgian-style at heart, landing somewhere between a Belgian golden strong ale like The Bruery’s Levuds No.1, yet has the herbal-spicy notes of an adjunct Saison like Tumescence (without all the horny goat weed and brett yeast). At 8.5 percent, the slightly hazy golden ale effervesces notes of lemon-glazed almond cookie dough, with herbal hints of eucalyptus and lemon peel. After the first sip, the tea-like character of Earl Grey pops out to say, Cheerio! as a touch of lactose lends a kiss of sweetness to the finish. Talk about a perfect Valentine’s Day beer!

The second collaboration with chef Brooke is with Bruery Terreux and should be ready in a few weeks. Join Chef Brooke for the release at Bruery Terreux in Anaheim, from 7 to 8 p.m. Feb. 15. Details here!