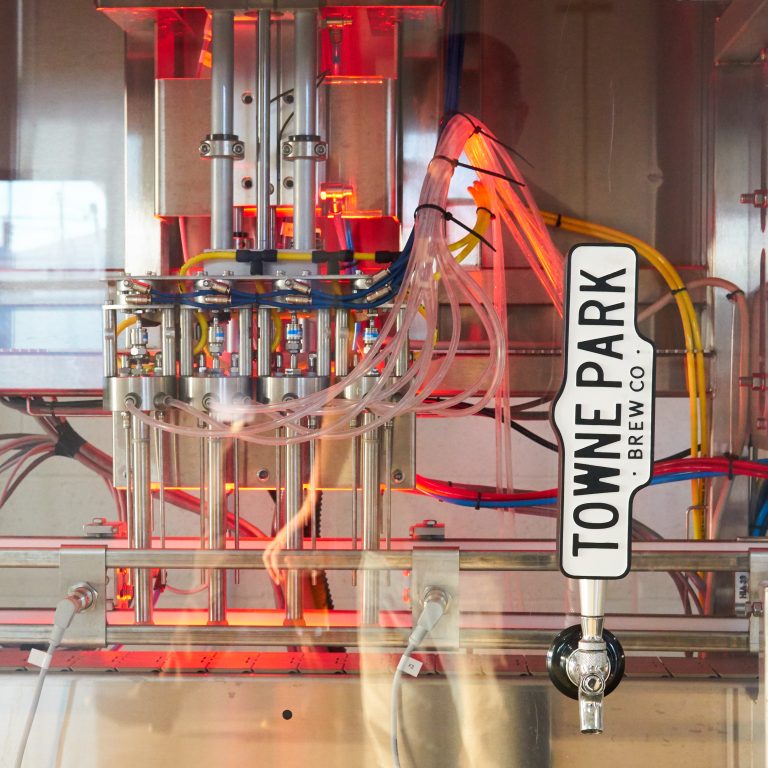 When I first moved to Anaheim’s Mother Colony Historic District a dozen years ago, there were exactly zero breweries. Disneyland pretty much ruled the entertainment landscape, where a typical night on the town consisted of taking an old-school yellow cab to Downtown Disney for proper vino, beer, and cocktails. If I wanted to visit a brewery back then, I’d hop on a party bus down to San Diego to visit Stone, The Lost Abbey, and Pizza Port; arguably the Mount Rushmore of SoCal breweries.

Now, a ten-minute stroll from my front porch in Anaheim can land me a total of four brewery tasting rooms. Two at the Packing District, one by The Ranch, and now the first to dip its toe in West Anaheim, Towne Park Brewery. The Towne, as it were, is quite spectacular in construction. What once was a tire shop now lies a multi-million-dollar brewery, clad with stainless-steel lagering tanks, a full canning line, gorgeous indoor/outdoor tasting room areas, and a view of what will likely be Anaheim’s next big bustle.

You may have already seen Towne Park beer flowing from O.C. taps as the brewery has contract-brewed while selling beer to select local accounts for more than a year. If you’ve been lucky enough to attend the Orange Coast’s Best Of events, you may have popped into their popup taproom at Rancho Las Lomas in Silverado Canyon. Although it may sound like a rap video, there is literally beer and a white Bengal tiger named Lily nearby…among other animals to check out at the Rancho’s wildlife foundation. Krikey!

But how are the beers? I’ll save my critique for a for a few months down the road as a new brewery can take a few batches to get dialed into the area’s water profile, make recipe adjustments, and hone-in on brewhouse efficiency. The strongest offering I had at the industry opener was the American Lager, which was dry, crisp, and clean; leaving very little for flaws to hide behind. My wife enjoyed a couple pints of the White Ale, which leaned heavily on the German side of Hefeweizen. Other beers on tap included a Pale Ale, IPA, and a tart wheat ale. Come check out their grand opening weekend September 22-24 at their Anaheim location. Don’t be shocked if they try and valet your car!