We are in troubling times. Now more than ever, your local brewery and pub needs your support if they are to have a chance to welcome us through their doors once this is over. Here’s an update on how our friends in the brewing industry are keeping the lights on with our support. What will become a running theme: Be sure to check on local breweries and pubs on social media as it is the fastest and easiest way for them to get information out to us.

There are some breweries that have closed for the time being. This could be a trend to follow if the incentives put out by the Small Business Administration aren’t taken advantage of. Tustin Brewing Co. has temporally closed, but I’m sure it’s not for long and is most likely to make things more efficient. More locations could close temporarily while others may remain open or reopen in this fluid situation.

As stated in a previous article, we’ve outlined several breweries that are offering online ordering and curbside pick-up. As guidelines keep loosening up, some are now able to offer delivery and shipping, too! As it’s been since the start of this, brewpubs are offering food orders for takeout along with beer to-go. Depending on the establishment, they may even be able to offer some guest beers to take home. As of this posting, Helmsman Ale House, Phantom Ales, Archaic (located in CENTRO restaurant), TAPS, Bottle Logic via their Epicurean food truck, Karl Strauss, Green Cheek Costa Mesa, Backstreet Irvine, GameCraft, Docent, Laguna Beach Beer Co., Pizza Port, and many more wonderful independent eateries with great beer have your hunger needs covered.

Since we are in constant flux, I encourage the OC Brewer’s Guild to come up with a plan to show us the up-to-date status of all our amazing breweries. This requires participation and responsive communication from the breweries themselves, however. That means my brewing and pub family need to be proactive on this as well. There is a shared document going around, and that’s a wonderful start. Let’s see that develop into a searchable and readily available resource, team!

Our strong brewers from the OC Pink Boots Society did collaborations last month with many breweries. These beers are available and showcases our strong female beer community, whether in the industry or in it for the love of beer. These collaborations are available at Anaheim, Backstreet, GameCraft, Karl Strauss, Lost Winds, Stereo, and RIIP.

It’s an especially difficult situation for taprooms/beer bars. It is my hope that we will see places like Mission Bar, Red Beard’s, Native Son, Brew House, and many others on the other side of this timeline. While some can offer beers for home consumption, others have operations in a complete stasis.

As much as we need to support them, some local breweries are doing their best to support their own communities. Breweries such as Bootlegger’s in Fullerton, Phantom Ales in Anaheim, and others offer some essential items, basic nonperishables, and fresh produce to go along with your beer purchase. Yet another way of our beer community doing what it does best. On top of this, Network Brewery, OC’s full distillery Blinking Owl, and perhaps others are producing hand sanitizer. 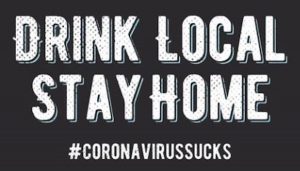 While we are talking about community, Cameron Collins of BrewHaHa Productions is doing his part. Now available, you can purchase “Drink Local, Stay Home” branded shirts and hoodies with all proceeds benefiting the members of the OC Brewers Guild. Coming on the heels of the successful Logger Fest, this is a class act by Collins and crew.

Below is a list of all breweries in Orange County that deserve a consideration for your support. Be vigilant on their social media accounts for updates, hours, and availability. We all appreciate and are grateful for your continued support during these trying times.

On behalf of all my colleagues — no, friends — thank you.