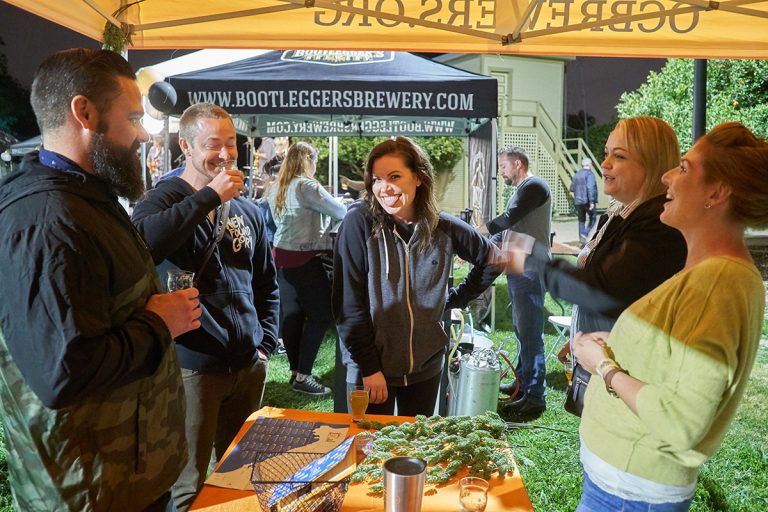 34 local breweries are members of the O.C. Brewer’s Guild, and late April they all have one goal in mind: to enlighten you about our diverse and award-winning beer scene. O.C. beer week is back for the third consecutive year, running from April 21 to 28, with many breweries collaborating, holding tap-takeover events, special beer releases, and of course the coup de grâce, a huge invitational beer festival held waterside at Newport Dunes. Of the many events, here are my must-hit events for the week!

If you want to get a head start, the unofficial pre-party starts on April 20th at Asylum Brewing in Anaheim, where they will have food trucks, live music, special beer releases, and raffles all weekend to celebrate their first anniversary.

Saturday the 21st, I recommend having “Pints with the Brewer” at Stereo Brewing as co-owner/brewer Rick Smets is by far my favorite guy to chat with while sipping his award-winning oatmeal stout, Wall of Sound (one of my favorite beers of 2017). Protip: wear your favorite band T-shirt for the slight chance it’s also Rick’s favorite – I hear it might buy you a beer! Stereo will have events all week long, check their website for details.

Monday the 23rd at Concourse Bowling Alley in Anaheim at the 91 Freeway from 6 to 10 p.m., don’t miss Unsung Brewing, Bottle Logic, Lost Winds, and Chapman Crafted as they face off in an epic bowling tournament. Each brewery will be bringing two beers to complete a perfect tap-takeover strike!

Wednesday the 25th, First Class Pizza in Irvine is holding an IPA Festival, where every draft line will be pouring fresh IPAs from all O.C. breweries. I suggest getting the Nagel special: pineapple-jalapeno pizza with a crisp and clear west coast IPA. It’s a perfect pairing, ask any cicerone.

Thursday the 26th, Tustin Brewing is hosting a unique beer dinner with their new (ex-chef) general manager…it’s different as they’re letting him take the reigns in the kitchen for a night. Be sure to reserve a spot in advance as seating is limited. If you can’t make it in Thursday, Tustin will have a cheese plate available all week to pair with various beers. (Menu)

Friday the 27th, it’s all about Huntington Beach as Riip Beer Company and Beachwood Brewing take over the taps at The American Dream burger-beer bar. This is a perfect opportunity to congratulate brewer Ian McCall on leaving one award-winning brewpub at Beachwood and joining another at Riip.

Saturday the 28th is all about the O.C. Brewer’s Guild Invitational Festival at the seaside Newport Dunes. Tickets and info available here.

Out of State:
J. Wakefield Brewing

Be sure to tag #ocbw2018 #ocbeerweek if you make it out to any events! I’ll see you out there!