If I were to tell you there’s a new hotspot in Irvine to get a drink, you’d probably shrug it off as some big beige building with impossible parking with no personality. That’s where you’d be wrong! The Boardwalk, where Solstice sits, is distinctly modern, eye-catching, and beams with character, both inside and across their seasonal cocktail menu.

Take for instance their French 75, which could be a simple classic gin and Champagne drink, is bombastic with flavor, using seasonal house-made pear and ginger syrup, Prosecco, topped with a delightful dehydrated pear. Its subtle sophistication and elegance are every bit as lively on the first sip as it is on the last. Pair it with their steamy Parker House rolls, which share some of the same ingredients.

You may be tempted to stick to their cocktail classics, such as their Diaqueri, a Paper Airplane, and the French 75, but there are surprises where you least expect. Solstice’s Toddy, for example, isn’t something you see on menus these days, especially with a tropical banana liqueur vibe. Sipping this warming boozy banana elixir on their open-air heated patio, late-night or even for brunch, is by far the best prescription for any day of the week.

Bar Manager Dylan Dinsmore doesn’t stop there, with his twenty-or-so-deep cocktail menu that’s filled with smoke, glitter, and a pinch of black magic; he offers two party punch options that are a hit with groups, there’s a list of vitamin-packed mocktails priced at only $6, and there’s even a secret cocktail menu worth exploring.

For the wine and bubbly lovers, Solstice’s bottles come mainly from Paso Robles up through Washington as well as some old-world classics. The restaurant’s only afterthought is perhaps the beer list, where there’s no particular food-friendly Belgian beers or even the most popular beer style, a great fresh local Hazy IPA.

What drink will you order first? Does the beer list need uplifting? Let us know in the comments!

Solstice is at 18555 Jamboree Road at DuPont in Irvine // dineatsolstice.com 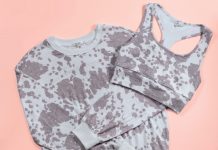