Have you ever arrived somewhere so early that you sat in your car and watched Netflix on your phone? This is me, sitting on PCH near the Five Crowns/SideDoor watching the latest David Cross special as rush hour traffic passes me by. This is normal, right? I realize showing up two hours early to a Five Crowns event is slightly ironic, given the mature crowd the restaurant brings. Admittedly, I’ve never dined at the Five Crowns, writing it off as a place my parents might go after dropping me off at the SideDoor (the younger, hipper, English-style gastropub connected to the restaurant), but tonight is different. It’s the 5th annual Porktoberfest! Being annoyingly early does have its perks…there’s usually an empty seat at the bar, and always a cocktail I need to try. While menu diving, the bartender whips out a propane torch and starts burning a plank of wood on the bar like some kind of crazed pyromaniac. “I guess they should turn up the heat in here, eh?” I say in my usual snark. “This is for the ugly gentleman,” she says. I peer around the bar, hoping to see someone uglier than I, then notice The Ugly Gentleman is a cocktail on the menu. Phew! I order one with my new-found good looks and watch the drink unfold.

Smoked-glass cocktails can be a showy “mixologist” type of novelty that can sometimes come off as a magic trick, but I admire the SideDoor’s speed in prep. It’s torched, then covered with a bottom’s-up rocks glass, so the smoke is trapped. Next, the ingredients are stirred together in a mixing glass on the side, then poured over ice into the smoky glass. The smoked maple wood in The Ugly Gentleman adds a nice depth of flavor akin to having a whiskey next to a hearth. It’s warming and savory, with notes of cinnamon, caramel, honey, and a touch of Concord grape fruit leather. “This drink also goes by the name Steve,” the bartender says as I take a few sips.

Created by newly-hired lead barman Randy Thais, the drink undoubtedly shows his influence crafting cocktails in English pubs where he worked while studying abroad in Cambridge. His knowledge of British culture will no doubt add to the pub vibe, something the SideDoor does very well.

Finally, it’s 7 p.m. and Porktoberfest is kicking off next door. Stay tuned for that swine-filled adventure!

The Ugly Gentleman, aka “Steve”

Instructions: Burn maple wood with propane torch and cover burned area with rocks glass so smoke is trapped. Keep rocks glass upside down to absorb smoke. Stir all ingredients into a mixing glass on the side. Flip glass back over, place ice and mixed cocktail over ice. Smoke should rise out. Drink. 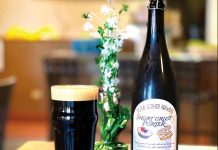 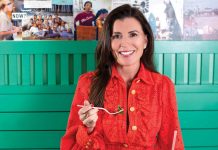