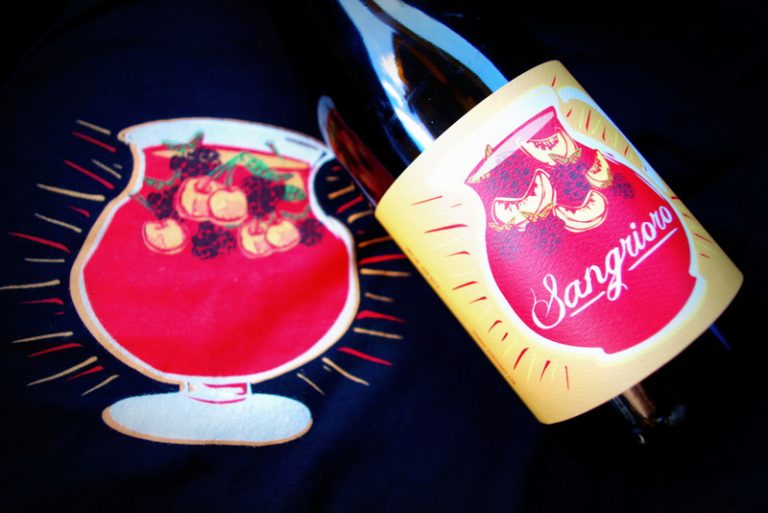 Like war bombers flying below radar, the Good Beer Company’s squadron reached the east side of 4th Street at 1700 hours late October. The payload? An eight-bottle carpet bomb release of tart, funky and fruited sour beer blends. The line outside reached well over a hundred, some finding shelter under trees while ordering takeout from nearby eateries. As the bay doors opened, wallets and credit cards were decimated. I hopped away only losing one leg, making it difficult to carry the dozen bottles back to the nearby parking garage.

The beers? They’re absolutely gorgeous. The four fruited variations of Sangrioro, all drink like a picnic after visiting the farmers market. To the new sour drinker, they’re easily quaffable, slightly tart with notes of fresh fruit dangling on your taste buds. To the beer geek, the soft lactic acidity bounces off the fruit, then French oak, then finishes with the fruit blend. It’s light, effervescent, and most of all, clean. At 4ish% ABV, they’re essentially session beers without the session price. The other bottles released haven’t been touched yet (UXO), but include Fiesta and Siesta, two dry-hopped farmhouse beers to celebrate their first anniversary, and two barrel blends.

I hit up owner Brandon Fender to get some details on the beers and what life is like in DTSA:
I know you hand-picked some of the fruit for the Sangrioro beer. Where did you pick?
The blackberries were hand harvested on a huge cattle ranch out in Julian where I grew up. It has been owned by my brothers wife’s family forever. My brother Bryce and I harvested the blackberries from the creek.
Where does the rest of the fruit come from?
The peaches, nectarines, and all the rest of the fruits  were grown up in the Fresno area. I connected with the farmer at the downtown Santa Ana farmers market. We processed hundreds of pounds per week by hand over the height of fruit season this summer.
The beers are low in alcohol, but full of flavor. How long would you recommend sitting on these beers?
As you know a lot of our beers are low alcohol, which is less likely to hold up to cellaring. With that said all of our bottled beers contain mixed cultures, which will help prevent oxidation and premature aging. Anything with fruit should be consumed fresh—fruit flavors do not get better with time.
How has your first year been in downtown Santa Ana?
We are very happy with what we have been able to accomplish in the first year, and we have a great team in place to launch into year two. We just recently doubled our cooperage, and bottle counts have doubled or tripled with every release we’ve done. I’m looking at some options to expand our fermentation and conditioning space right now.
What has been your overall go-to beer? What do most people ask for? If IPA, do you plan on having an IPA/PA around regularly?
We get a mix of people looking for an IPA and people looking for wild beers. We get a lot of opportunities to introduce people to wild beers or Belgian styles. We definitely want to keep an IPA on tap … Because we love IPA!
The Good Beer Company is at 309 W. 4th Street, Santa Ana, 92701.