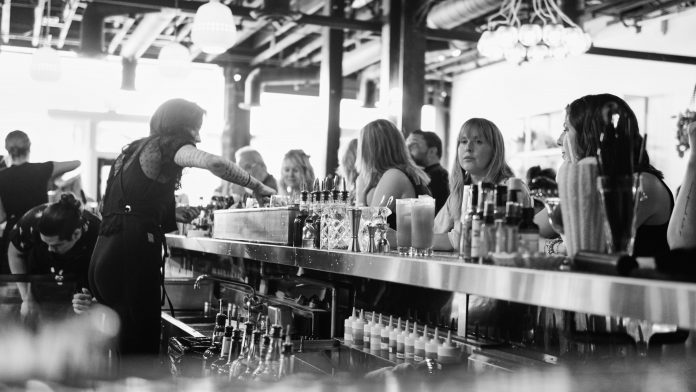 I’m pretty sure I’m the first person to ever Vacation in Santa Ana. Not that the city itself isn’t worthy; I’m actually the first paying customer at the long-awaited Vacation Bar on Fourth Street, met with a venerable Hoorah! from the bar staff…thankfully no leis or Polaroid flash cubes to be seen. Instead, I’m greeted by a bar space that could very well be inspired by Miami’s Fontainebleau hotel bar in the 1950’s, complete with Frank, Dean, and Sammy cracking jokes over subtropical drinks.

When one thinks of Vacation, the words tiki, kitsch, hibiscus, and even palm trees come to mind. Instead, Vacation is every bit a vacation from all that. It’s respite from the bar norm.

There are no “martinis” served 20 different ways, no Mai Tai’s with rum that smells of SPF 8, and no attitude. This is laid-back Vacation, where for only a few bucks in the streetside meter is the equivalent of treating your tongue like an unstamped passport.

The cocktail menu is sort of like Disneyland’s It’s Small World, where your taste buds intermingle with worldly inspirations via 12 cocktails, and bar snacks that are deeply satisfying. Like the ride, you may find comfort in the familiar, yet be intrigued by the unknown. Each drink is inspired by a travel-worthy city around the globe; the only thing missing is an animatronic hippo ballerina.

Starting with the familiar, I order a Santa Ana-California cocktail and quesadilla, as Emily Delicce, the Isaac to this Love Boat, gracefully squirts carrot juice into a jigger as I attempt to read her arm tattoo like a Hunter S. Thompson book. She pours in some local Blinking Owl Aquavit, Aperol, pineapple, and cardamom, then finishes it with a garnish…no doubt inspired by the latest Nicki Minaj hairstyle.

The common thread with these cocktails is they’re all shaken, nothing is stirred. The garnish from drink to drink can get a bit garish, such as with Marrakesh-Morroco, whose never-ending Persian cucumber is seemingly longer than the gum in a Bubble Tape.

It takes trust to order an Islay Scotch cocktail, and with my experience with the first five drinks (over two days with three people…don’t judge), I put my faith in Vacation’s cocktail menu creator Gaby Mlynarczyk’s (@lalovingcup) skills.  The combination of Laphroaig, sherry, pineapple, lime, chocolate, and spices had me thinking the ingredients would make an excellent pie. The drink looks like a pub beer served on nitro, complete with cascading head. The combination of smoked black salt, super-satisfying foam, Laphroaig’s peetfire phenols, and overall mouthfeel left me flabbergasted. “It’s good with mescal too,” says Gaby, with her delightful British accent.

Santa Ana has many terrific bars, but Vacation is a must-stop destination, not just if you’re in downtown, but if you’re somewhere on planet earth.