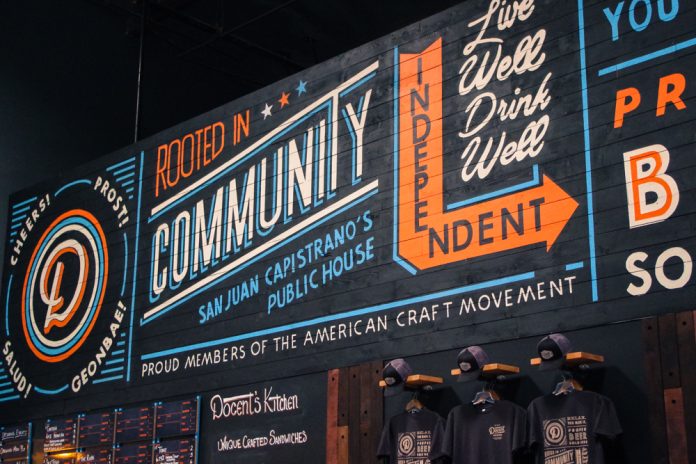 On March 25th, San Juan Capistrano celebrated the annual swallows day parade, commemorating the flock’s return to the historic mission from Argentina. Ironically, I chose to commemorate a different type of swallow; the opening of a new brewery and public house: Docent Brewing, which opens to the public on April 1…no joke.

The name is simple enough, head brewer Bryan Giesen said, “We not only want to be guides of great craft beer, we also want to continue being the student.” The goal is the let the beer pilot the way to new adventure, and let the customers decide what styles of beer are made, and also what continues to be made. Canteen, the first beer I sampled, is dubbed a palesneer and is somewhat like an ultra-clean cream ale, a pilsner, and a pale ale combined. It’s ultra refreshing, crisp, and perfect for when you’re pushing a lawnmower around the yard. The Rube, the hoppy red ale, is inspired by the classic Manhattan Cocktail,with some citrus-caramel sweetness and a kick of bitterness to balance things out. I also sampled the IPA and coffee porter on nitro, which are delicious.

Joe Wilshire, Brian Hendon, Scott Cortellessa, and Bryan Giesen are the docents of Docent, who thought to bring back a pub vibe to the area. Although the brewpub is centered in an industrial area, it sits back to the San Juan Creek Trail, meaning the brewery is accessible by mountain bike, which many took advantage of on my visit. It’s also a five-minute walk to The Coach House Concert Hall, and I look forward to a proper beer and bite before a show soon.

Aside from the foosball table, vintage furniture, and ultra-long bar, Docent has a small kitchen, which sizzles out a slew of sandwiches (Korean Reuben, anyone?), salads, and house-made fermented veggies. With all of this great beer, food, and pub-like atmosphere, I can see Docent becoming an instant classic for the neighborhood. As you can see in the video I shot below, San Juan people are thirsty for great beer.