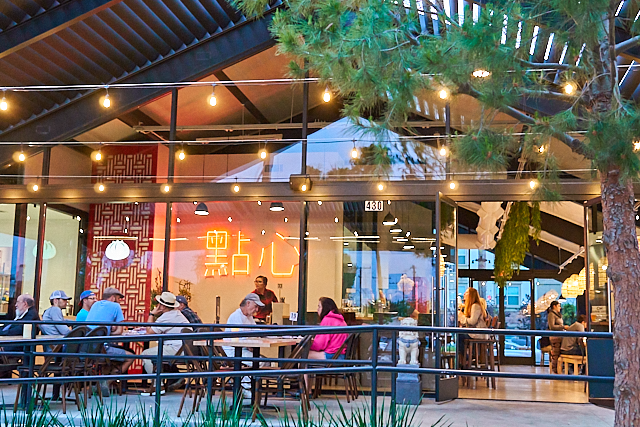 I’m not sure which is better: a dim sum place that forces foodies to interact with local craft beer, or a craft beer spot that offers beer geeks the option to snack on chicken feet. But here I am at Anaheim’s newly opened 18 Folds, chopsticks in one hand, Asylum Brewing Monsters We Breed double IPA in the other, trying my best to look cool plucking bones from my teeth…pretending like I’ve done this a million times before. Confession: it’s my first.

In the dim sum world, I’ve been told that nibbling on chicken feet is a right of passage. Although the menu is filled with skillfully prepared morsels to yum out on, how can you not at least order the dish just for the Instagram likes?  Although I found it akin to chomping down on fatty wings, I’m not sure what all the fuss is about…but at least I tried them, and I’m now in the dim sum club.

If you haven’t been to the Anaheim Packing District in a while, you might be surprised to see the 18 Folds new farmhouse-style building inside Farmers Park; open side windows facing the eco-friendly grassy hills, complete with laughing kids rolling wildly down. As if the Packeria couldn’t get any beerier, 18 Folds is the only place offering 18 taps of all Anaheim-produced beer—an O.C. First. Not only that, it’s the area’s first dim sum order-by-counter experience that I’m aware of. There’s a comfy L-shaped bar with view of the kitchen and plenty of communal seating to relax with your food crew.

The name 18 Folds refers to the average number of creases on a dim sum dumpling, which are meticulously prepared fresh from scratch on site. Steel steamers arrive at your table number, the meat-filled parcels get snatched up like tiny Amazon prime porch pirates. For first-timers, definitely try the siu mai, which are traditional savory pork dumplings, sticky rice in lotus leaves, and definitely get your sticks wrapped around either of the noodle dishes. “The garlic noodles will definitely give you the dragon breath!” says delightful co-owner Kat Vu. Don’t forget to stock up on sauces before your food arrives, among them the really great habanero dipping sauce if you’re a heat-head. The ube ice cream serves as an antidote.