Though the landscape is not ideal, a few breweries have opened in the past few months. Here’s what you might have missed.

Broken Timbers Brewing Company
2910 E. La Palma Ave., Anaheim
Located where Hoparazzi used to be, Broken Timbers offers some unique beers based on a proprietary yeast strain. It might need some evolution to mellow out some notes, but it’s on the right track for some eccentric beers. The traditional brews are pleasurable, as well. Patio seating on the weekends.

Flashpoint Brewing Company
7302 Autopark Drive, Huntington Beach
Flashpoint has joined the brewery game in Huntington Beach. Enjoy one of the traditional lagers, such as Helles or German Pilsner, or perhaps a refreshing seltzer on the patio on weekends.

Delahunt Brewing Company
1011 Calle Recodo, San Clemente
This is a quiet one that began operations in March but had to delay opening. It has built up an impressive facility that officially opened June.

Capistrano Brewing Company
31721 Camino Capistrano, San Juan Capistrano
Located in the same location as the long-awaited Heritage Barbecue, this tap house gives the backyard barbecue setting a nice touch. The brand is a revival of one that disappeared in the ’90s and is now a project by the same guys who will soon bring us Bearded Tang. Speaking of…

Bearded Tang Brewing (Coming Soon!)
12885 Beach Blvd., Stanton
Co-owned by Jon Chiusano, formerly of Bottle Logic and most notably of TAPS fame, heads this project. The talent he has acquired, in the front of the house and in production, brings high hopes to Bearded Tang.

Cerveza Cito (Coming Soon!)
309 W. 4th Street, Santa Ana
Taking over The Good Beer Co.’s former space, Cerveza Cito is set to open its doors in a month or two. The location was purchased by the grooming product company Sauvecito. While already having many different products and apparel, Sauvecito will now be able to add a beer brand to add to its ever-growing portfolio. Kevin Buckley (formerly of Barley Forge) will be on the brew deck. 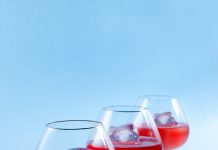 Cocktail of the Year: Bedoya