Coming up with your own Top-10 List of Favorite O.C. Beers is excruciatingly difficult. Sure, rattling off five or so is easy, but once you get to No. 10 and there are still 30 left you want to squeeze in is where it starts to hurt. For that reason, I’m not a huge fan of listicles. However, with year-end in mind, it’s great to look back on some beers that I thought moved the county forward in terms of flavor and impact.

10) The Good Beer Company Black Caviar American Wild Ale, 4.2 rating*: Released as part of their Stable beer club, this 4.1 percent ABV sour ale is rested in oak barrels for a few months on lavender and blackberries. What blew me away was this incredibly subtle beer with delicate acidity and a pleasant herbaceous peppery finish. Since it’s release, I’ve been on the hunt for more! Learn about their 2018 membership here. 9) Stereo Brewing Wall of Sound Oatmeal Stout: 3.78 rating. The first time I had this beer, it was pouring rain outside their Placentia tasting room and a stout sounded perfect to pair with my steak burrito I got from the food truck du jour parked outside. Wall of Sound isn’t complicated at only 5.6% percent, but it has a bright ray of sunshine that breaks through the creamy-roasted barley character in the flavor. Oh yeah, it won Gold at the Great American Beer Festival for the best Oatmeal Stout in America. No big whoop for a one-year-old brewery.

8) Tustin Brewery Old Town IPA 3.8 rating, 7%:When The O.C. Register said Tustin is best known for its guest taps, I couldn’t stop laughing for at least three full pints of Tustin Old Town IPA. It’s such a perfect West Coast IPA, most of the established beer geeks replied with “FAKE NEWS” upon reading the article. If I were to vote one beer to be representative to O.C.’s past and present beer scene, Old Town would be it.

7) Chapman Crafted Beer Thank You For Your Service Hazy IPA 4.0 rating, 6.3 percent: Chapman’s Brewer Brian Thorson might be known for cranking out big batches of Denogginizer at Drakes in his recent past, but here in Orange, he’s a beer ninja, quietly crafting some of my favorite beers while in a karate stance. Thank You Hazy IPA is technically perfect for the New England Hazy IPA style, aside from the usual flashy Instagram-worthy can art.

6) Barley Forge Harry Tuttle Foeder Saison 3.56 rating, 6 percent: Competition in the beer world is fierce.  Luckily it tends to raise the bar for what consumers like me expect. Case in point, Gunwhale Ales moves in next to Barley Forge with a small foeder (oak beer fermentation vessel), and Barley Forge announced the installation of a larger one. Hardware aside, the beer Barley Forge has been pulling out of its giant oak tank, Harry Tuttle, is always evolving. One visit it’s bright and tropical, the next it’s stone-fruity and earthy. Sure there’s The Patsy, but Harry Tuttle is a Top-10 must-get.

5) Gunwhale Ales Majordomo Citrus Farmhouse Saison 3.73 rating, 7.5 percent ABV: Speaking of Barley Forge neighbors, the Gunwhale guys came out of the gate with several pale-farmhouse style saisons, each of which instantly got my attention. Although all of them are completely different, Majordomo did it all for me. I believe I screamed, “YES!” when taking my first sip, and have been a fan ever since. Yeast-driven in character, the citrus plays incredibly well with dry and peppery yeast character in the beer. 4) Noble Ale Works Creature from the Murk Lagoon Double IPA 4.25 rating, 9.2% ABV: All the hazebois love themselves some murk, and it’s no surprise OC’s most decorated IPA brewery can still bring metric buttloads of hop aromatics in pint-can form. Murk Lagoon is a bird of paradise on paper, yet drinks like a daisy. How does a 9+ percent ABV beer drink so effortlessly? Is it magic? Noble’s IPA can releases will forever be on any top ten list I create, even if it’s an article about burritos.

3) Taps Fish House & Brewery Silent Warrior 4.26 rating, 11.5 percent ABV: A beer designed with charity in mind is cool, but when it wins gold at GABF, a true warrior is born. The black beer is made with figs and dates, a nod to the many men and women of our military who serve in the Middle East where the two fruits are grown. In a world of pastry stouts, the Taps infusion inspired me to eat figs and dates anytime I drink bourbon neat as it’s such a perfect combo. 2) Green Cheek Beer Fest Friends 3.69 rating, 5percent. Nobody really discusses the fact that one of the world’s best master brewers, Matt Brynildson, collaborated on a beer made here in Orange County. Not only that, he brought empty barrels from his famed Firestone Walker Barrel Union to make an Oktoberfest-style kellerbier with Green Cheek’s Evan Price. I mean, sure people go nuts for their Cocohut IPA, but Fest Friends is truly unique, delicious, and making me crave dimple mugs full.

1) Bottle Logic Stealth Mode Tart Wheat Ale with Blueberries 4.2 rating, 5 percent ABV: The can-art alone is tattoo-worthy, not to mention the vibrant violet hue of the beer. This liquid had me reminiscing about blueberry pastry pies you can find in convenience stores as a kid. A beer with notes of blueberry Krispy Kreme donut? The craziest part is that the beer works, and is so much different than any other kettle-soured wheat beer. It’s like liquid childhood.

Those are my top ten beers of 2017, what were some of your favorites?

*all ratings are via Untappd 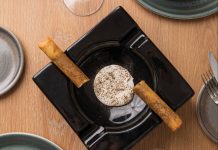 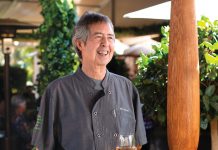