Home 2015 How to Pair Oysters and Beer 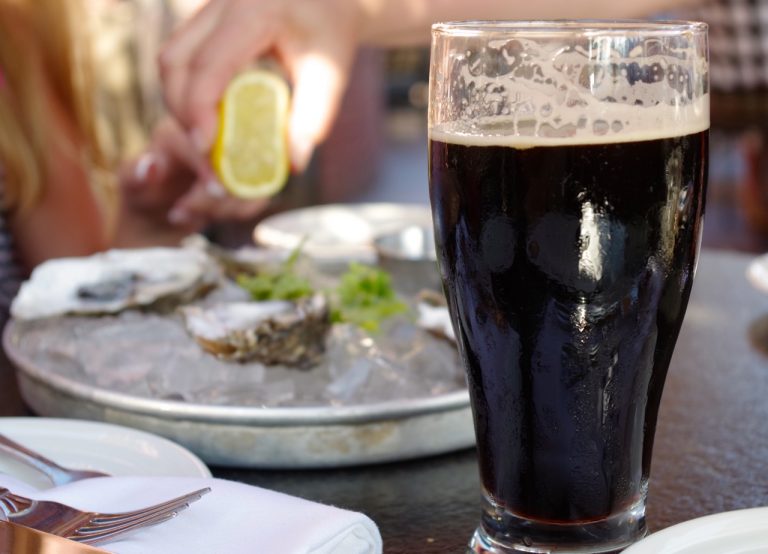 While sitting in a pub admiring the west coast of Ireland, a woman pulled up a stool next to me at the bar and ordered oysters, asking the server what kind of wine he would recommend. “Oh, we have a lovely drink that’s made in Dublin; ’tis a bit dark and bubbly, but pairs beautifully.” To my delight, he slid a pint of Guinness her way. “If you don’t like it, I’ll buy it,” he said with a wink. Ten minutes later, the shells were placed upside-down and her glass was empty.

There’s something about the creaminess of an ale poured on nitrogen that admires the delicate texture of an oyster. But the pairing doesn’t stop there. Several local beers can bring out the best of these elegant bivalves.

Raw Oysters: Just as I wouldn’t drink a cup of coffee with raw oysters, I do not prefer the roast of a dry Irish stout. Although it’s the age-old pairing, I prefer a light lager to magnify the subtle flavors. German-style beers such as Kölsch, Helles or Pilsner seem to enhance the sea-brine and complement the often melon-like sweetness. TAPS Fish House & Brewery has you covered on all bases; grab a flight of beers to see which you prefer. Tip: sip the liquor off of the oyster first, then replace it with splash of your beer before slurping.

Charbroiled or Rockefeller Oysters: Up the intensity of the beer with hops and alcohol, try a saison or IPA. Again, samplers are your friend.

Fried Oysters, Po’ Boy: With all that richness, you’re going to need a palate-cleansing beer, somewhat dry with boost of carbonation. Bruery Terreux’s Tonnellerie Rue is just the beer, which sometimes opens like a bottle of champagne (be sure to have a glass handy on opening). Not only is this farmhouse saison fermented on oak with wild yeast, it has a gentle kick of rye to help cleanse the palate and play off of the lemon-spritzed cornmeal crunch. A nice double IPA like Noble Ale Works Tongue Tickles DIPA would be my other choice. Sneak bottles of beer into Shuck Oyster Bar, which has no corkage fee. They also have local beers available on a rotating basis, ask your server for suggestions.