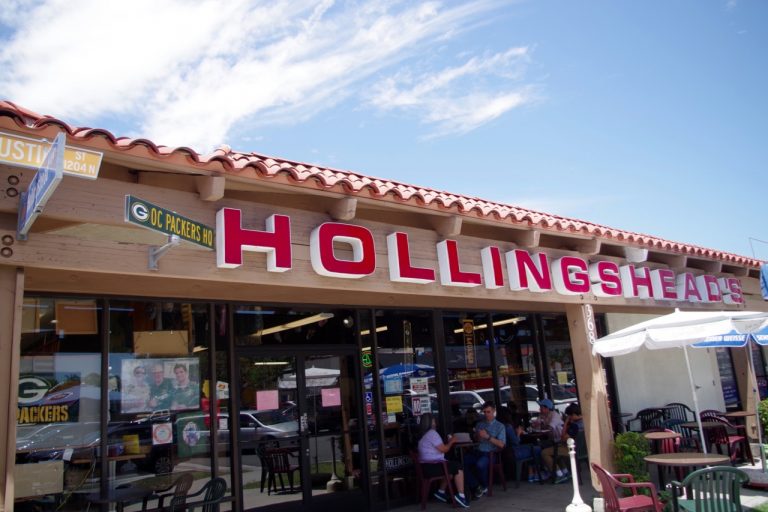 Bellied up to the bar at Hollingshead’s Deli in Orange, you’re bound to notice a few things. Brett Favre, a bevy of world-renowned beers, and a sitcom-like banter over the P.A. system.  Each of which makes for an interesting atmosphere for sipping a dimple mug of Pliny, or perhaps a fresh Weissbier from Germany. A lot has changed at the deli, and if you haven’t been in a while, now’s a great time to get back.

Hollingshead’s is a family affair, with Ken Sr. (now passed), son Kenny, and grandson Michael leading the cheese-head nation to a proper deli sandwich just like mom made, bag of weird chips (I chose aged cheddar and horseradish…don’t judge), and an Artifex Brewing Co. beer for a solid Saturday lunch. Oh, I almost forgot the six-pack of Pizza Port Brewing Swami’s IPA to take camping this weekend.

The remodel kept the heart and soul of what Hollingshead’s is all about, but took it from an enchanted cheddar mancave to a clean-cut sports bar, where signed footballs are encased, yet the newspaper clippings that fluttered when the door swung open are now gone. Vince Lombardi would be proud. So would Ken Sr.

Thursday, July 14, is tap takeover night, hosting Almanac Brewing Company out of the Bay Area, which is truly farm to barrel. Almanac’s beer list may sound like a farmer’s market, but their sour beer is incredible, bursting with fruit aromas, complex barrel character, and puckering tart finish. For the hop nerds, the hoppy sours are also a mind-scrambler, with just enough hop aroma to tease your brain into thinking hops, yet finishes tart instead of bitter. Oh, they also have an IPA and hoppy Pilsner, if sour beer isn’t your thing!