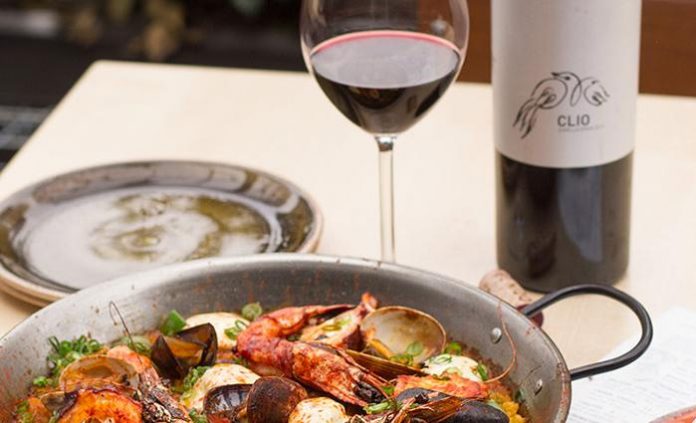 I won Hamilton lottery tickets!—two tickets for a mere $10 each to the second night at Segerstrom Center for the Arts in Costa Mesa. And get this—the lottery seats were in the third row!! In order to take both girls, I ordered a one-seat online (in row 12) and gave them the third-row tickets.

My girls and I have been Hamilton-obsessed for nearly two years. We know every song, phrase, and solo. We also know a whole lot more about U.S. History than we did before! As you know, these tickets are coveted, pricey, and tend to sell out. But because the Hamilton powers that be are just plain cool and have the foresight to include patrons with different-sized wallets, they began the Hamilton lottery. It opens 40 seats for most shows, which can be won via the Hamilton app. You can enter for touring cities such as Chicago, London, and Costa Mesa, where the play runs until May 27.  I can’t believe I actually WON!

A Broadway show experience isn’t complete without pre-theater dinner and wine. I don’t recommend winging it like we had to, given our short notice. Lottery ticket winners learn just 24 hours before the show, so restaurant reservations were sold out. My girls and I happily snagged a booth in the bar at Maggiano’s, where I ordered a 9-ounce glass of rose (I sure love the 9-ounce pour option), the girls ate mac ‘n’ cheese, and we toasted to our fortune!  We were impressed at the onslot of theatergoers arriving in droves to eat and sip before for the 7:30 curtain call.  Under different circumstances, I’d dine as close as possible to the theater, to extend the dinner and wine and shorten the haul in heels. These would be my choices for great wine experiences.

This acclaimed restaurant is a stone’s throw from the Segerstrom Center and has an interesting and compelling wine menu that spotlights Spain, the wine industry’s darling for several years for its top quality and affordability. Vaca’s wine list is deep and features delicious Spanish varietals such as cava, verdejo, viura, and tempranillo.  Pair your choice with chef Amar Santana’s tapas menu, cheese (manchego!), paella, and beautiful cuts of meat.

Leatherby’s is inside Segerstrom Concert Hall and owned by the renowned Patina Restaurant Group. Its recent facelift brought it from old school to sleek and modern, with a new steakhouse focus. The wine menu is vast and varied, with selections from Burgundy to Santa Barbara. Like Vaca’s, it’s broken into varietals, so theatergoers can make quick, efficient choices. Patina also handles the catering inside Segerstrom, where I ordered their private label cuvee brut sparkling wine. You can even order your wine or cocktail ahead of time, to pick up at intermission!

Had the play not ended at 10:30 on a school night, we would have huddled back in our booth at Maggiano’s for a night cap and some ice cream to relive every moment. Today, one daughter is wearing her new Hamilton-logoed T-shirt, the other is wearing her new “A.HAM” hat, and I’m drinking coffee out of my new Hamilton mug. A life-changing night for us.

“How lucky we are to be alive right now.” – Hamilton, An American Musical