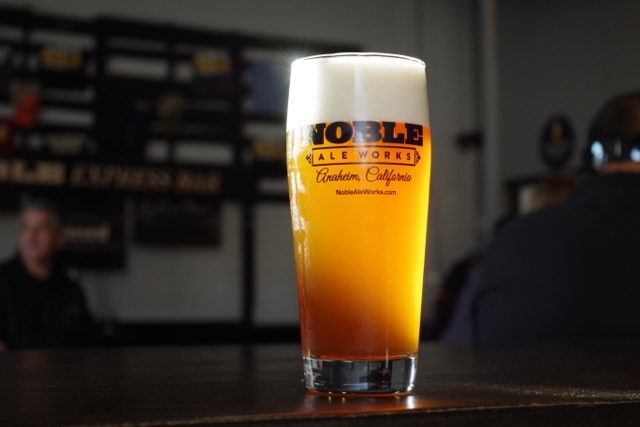 People have referred to Noble Ale Works in Anaheim a lot of ways during its five years in business. There’s Club Nobles, No-Bell Ale, the L.A. Nobles of Anaheim, and even simply home. Regardless of what you call it, the place is known for fun, inventive, clean, delicious beer. Let’s look at some of the core moments that have earned Noble Ale Works a top spot on most beer geek’s lists, plus info on the fifth anniversary party: Tongue Tickles Double IPA – A few days before the first L.A. IPA Fest, Noble dropped a hop-bomb on the beer world. When smiley beer-tender Jenny slid a glass of Tongue Tickles across the bar, I knew it was something special. Sniffing the beer with a furrowed brow, I’m pretty sure the song “Dream Weaver” played in my head. “Whoa,” I said, giving my best Keanu Reeves impersonation.

The Single Hop Shower Series – You toss your dollar bill out and the green, spiky hop flower exposes its pungent, resinous lupulin glands. “Oh yeah!” you yell while rubbing your hands together, and just like that, the sticky hop resin is everywhere. That’s kind of what this beer is. It puts one hop varietal on a pedestal so you can learn about it.

Nose Candy Session IPA – I’m pretty sure this would have been Jordan Belfort’s favorite beer on “The Wolf of Wall Street.” “On a daily basis I consume enough hops to sedate Anaheim, Orange, and Santa Ana,” he might say while chugging a few growlers. It won Noble its first medal in competition.

Naughty Sauce (top picture) is more than just a blond coffee milk stout served on nitro; it’s best described as “The F-Word in a glass.” Since its appearance April 2013, the base beer with a special Portola Coffee Labs blend  always has been worthy of a pint. It’s creamy, ambrosial coffee goodness is approachable, even by people that don’t typically enjoy beer. Delicious naughty variants include Yoga Pantz (pumpkin spice), Cinnamon Roast Crunch (just like the cereal), and Bean Bump – Imperial Naughty Sauce with vanilla and cocoa nibs.

Since brewers Evan Price and Brad Kominek spent back-to-back summers in England, their cask program at Noble has become a hidden gem. Traditional ingredients produce cask beer that’s nuanced and bursting with life . Of the many, many proper pints I’ve had hand-pulled off of Noble’s well-worn Angram beer engine, Porter Exporter, English 201 ESB and The River Thames Pale Ale got me feeling like I was in a London pub.

Noble Ale Works will celebrate it’s fifth anniversary in the parking lot outside the brewery on Feb. 20. Rumor has it the event space will be twice that of previous years, with more than 45 featured beers. The best part is the entertainment, where industry brewers form bands and play inspired tunes.  Tickets and info are here!