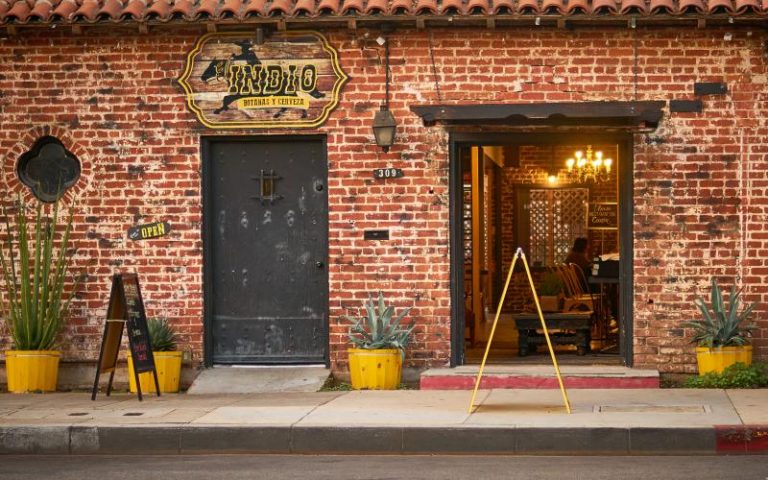 On Third and Broadway in Downtown Santa Ana, an old time-stained brick and weathered mortar building is now home to the most unlikely of craft beer bars. You won’t find any Noble Ale Works, no Bottle Logic, and no Bruery on tap. Instead, every tap at El Indio Botanas y Cerveza is loaded with cerveza artesanal…that is, craft beer brewed by fantastic breweries south of the border. If you haven’t heard of Cerveceria Insurgente, Border Psycho, or Agua Mala breweries yet, this is the perfect opportunity to get acquainted.

In a neighborhood where the word “gentrification” is as real as evil parking meter maids, it’s refreshing to see something as pure as beer made by craft brewers in Mexico as the only option. A dozen craft-draft and several big beer Grupo Modelo offerings round out the ever-curious beer wall. Not only are the kegs fresh, the styles of beer range from an oatmeal stout poured through a coffee randall (on my visit…may change) to the double IPA from Insugente called Lupulosa, which is soft in approach and isn’t your usual West Coast hop bomb. It’s balanced in a way that makes it soft, citrusy and floral. It’s notably better than some our local breweries.

“My wife gave birth to our first child on a Wednesday, then we opened this place two days later…so basically it’s like I had twins,” says co-owner Oscar Olivares with a smile. Now open for two months, the menu of botanas—shareable bar bites—has changed slightly as they figure things out, but expect things like tacos, soup, and finger foods. As prices for each item range from $4 to $8, the entire menu can be sampled for a mere $50. “It’s pretty much happy hour all the time here at El Indio,” says Oscar.

DJ tables greet you on the way in, so don’t be surprised to hear guest DJs spin a variety of classic, funk, and even reggae on select nights. Taco Tento Tuesday is also a thing, where $1 tacos can be paired with $3 house beers (usually lager), meaning you could get two beers and four tacos for measly 10 bucks. Such a steal! Craft beer prices range from $5 to $8 for a 12-ounce glass (size shown above).