Believe it or not, grabbing a proper British pint of real ale doesn’t require a passport. As much as I would love to purchase a plane ticket to Heathrow and disappear into a  pub somewhere on the Bermondsey Beer Mile, I found a new brewery in the Inland Empire that replicates the British brewing and serving process to a “T”: Inland Wharf Brewing Company in Murrietta, and it’s only an hour away.

After our rainy winter here in SoCal, the backroad trip I took off the 91 on Green River Drive looked a lot like driving the midland roads of England, complete with rolling hills of patchwork green; the only things missing are painted sheep and mossy stone fences separating various family farms.

Beers like Murietta Pride play tribute to the perfectly-rounded reference beer, Fullers London Pride. Binnacle List, a beautifully made special bitter, was a favorite among brewers at Firkfest Cask Ale Festival this past month. The Charlie Roger, at 4 ABV, is one of my absolute favorites. Despite being dark, is one of the lightest beers of the day with a nice creamy mouthfeel from torrified wheat malt and a kiss of chocolate. So complex, so drinkable, and so perfectly British.

Some of the beers can be sampled on both cask and keg simultaneously, which offers an education on the difference is between the two serving techniques. The two methods are served out of different cellars: cask at 50F, keg at 38F. The keg beers seemed more like perfectly composed digital photographs, whereas cask seemed like polaroids…just a hint more lively, less carbonated, smooth, and ever changing. One day, a cask of Pride tastes tea-like and herbal. On our visit, I noted hints strawberry preserves.

Our tasting complete, my father-in-law and I finish watching some March madness on their tasting room TV’s, play some sandy tabletop shuffleboard, then depart for some local food. With low-alcohol beers, it’s refreshing to have a pint or two and head home safely. 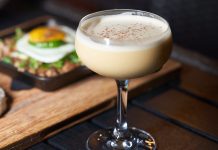 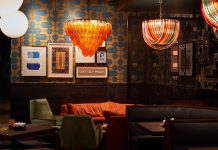