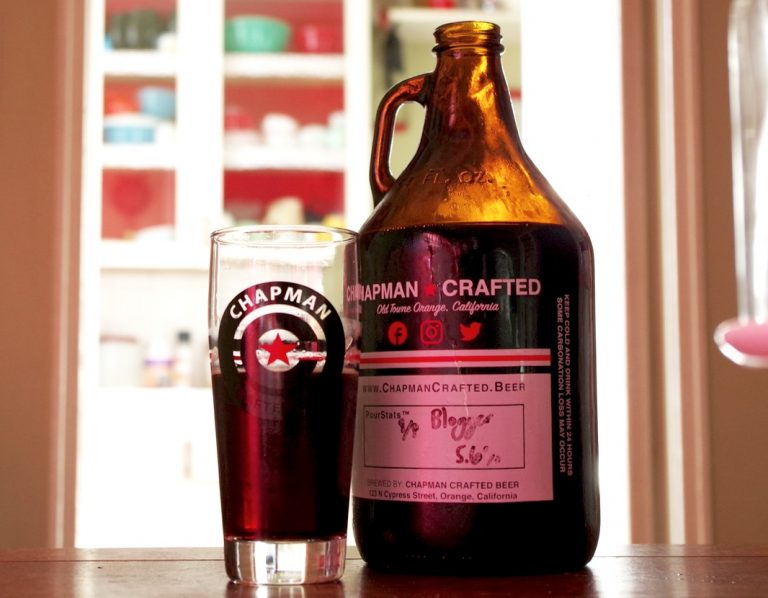 When a new brewery names a beer “Blogger” and has the tasting notes as “smooth, roasty, and opinionated,” that’s more than an invitation, it’s a dare. Granted, Blogger is a Black Lager, a traditional German schwarzbier of sorts, a beer that doesn’t take much to bait me for a taste. It’s more like a tractor beam, where the schwarz is with me, and I go full on spaceballs for one. I’m German, give me a break.

Chapman Crafted Beer isn’t a couple homebrew dreamers with grandiose goals. Chapman is Wil Dee, a beer-passionate man with a brood of beer establishments in Orange and brewer Brian Thoreson, who has made some of the most notable beers in California’s history at his tenure at Trumer Brauerei, Drakes, then with Haven Gastropub’s short-lived Pasadena brewpub. Chapman Crafted Beer is pill box on a hill, silently waiting to take over the scene.

Blogger, the beer, I’m happy to say, is dialed in. Hints of red shine through the darkness with notes of hard raspberry candy, pumpernickel bread, subtle roasty grains, and an incredibly clean, drying finish. The flight I cranked through at the brewery, a few stone skips away from the historic Orange circle, were incredibly bright with zing and awake with flavor. I know you’ll get the IPA, maybe the Imperial IPA, and possibly the pale ale…all I’m saying is give a dark German-style lager a try, and if you do, pair it with fresh bratwurst from Mattern Deli a few miles away.

Chapman Crafted Beer is no doubt something you’ll see me write about quite a bit in the future. Check them out before they get huge, or perhaps at the Orange International Street Fair on Sept. 2-3.