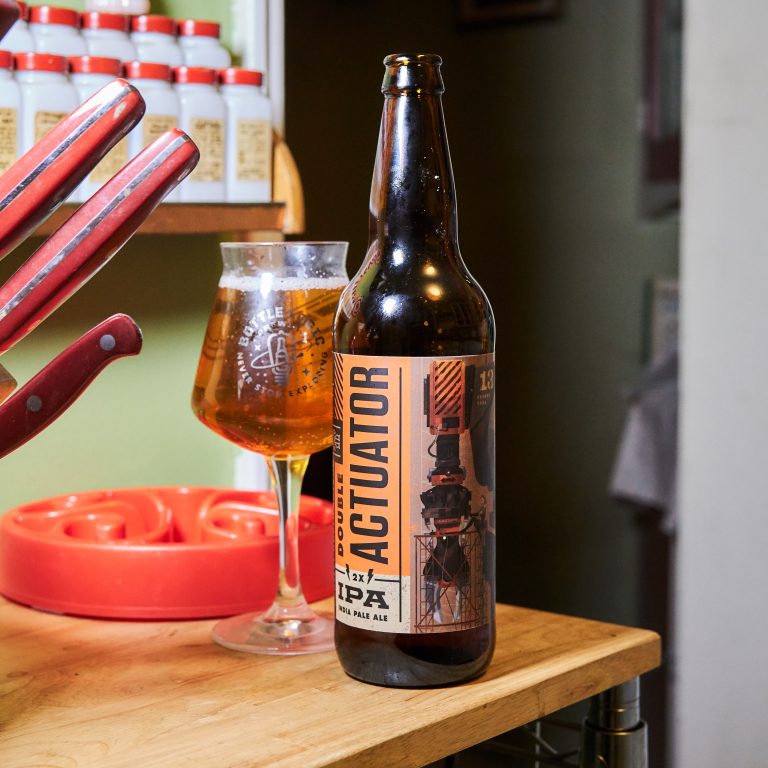 Five years ago, a few nerdy guys approached me at a random brewery, handed me a swing-top bottle of homebrewed beer and said, “Hi, we’re opening a brewery in Anaheim next year, let us know what you think.” It’s not often you’re handed a homebrew that tastes professionally brewed. I recall it being malty, boozy, and hopped like mad. They replied that this was their double IPA pilot batch for what would later become Double Actuator IPA, and that brewery would soon become Bottle Logic Brewing.

It’s now strange to think of Bottle Logic as the underdog just a few years ago. The original lineup of She Shot First Pale Wheat, Tattered Prince Saison, and Double Actuator IPA were the brewery’s first three packaged beers and were each widely well-received. Six months after opening, Bottle Logic shocked the beer world with its first medal at the Great American Beer Festival; a gold no less, for Lagerithm. The beer repeated gold a year later, a mark that a brewery can not only make a technically difficult beer, but they can do it consistently with a new lead brewer, Dylan Mobley. They also added a second gold medal that year for Cobaltic Porter.

Like most rock stars, one can’t play the first album forever. As such, most of the original lineup is gone but not forgotten. Remnants of Tattered Prince lay alive and well in the sour cellar, waiting for various yeast and bacteria to raise the acidity. Bottle Logic recently re-brewed Double Actuator for its fourth anniversary, and I must say, with all the can releases of 2017, my bottle opener at home seems like a forgotten relic.

At 9 percent ABV,  Double Actuator is a statement of what IPA’s once were. Deep golden clear color, crystal malt sweetness, and plenty of resinous floral and tropical hops. The beer delivers a bouquet of overripe tangelos, blueberry, and plumeria notes to the nose, yet leaves the alcohol unabashedly nude on stage. At first, Double Actuator is challenging, especially after drinking a bevy of New England-style IPA’s, then it opens up into what I truly love about the style: a clear picture of what hops are capable of. To some haze fans, this beer might make a good YouTube challenge video. For me? Yes, I’ll have another.

Catch Double Actuator Double IPA in most area beer stores and at Bottle Logic’s tasting room located at 1072 N. Armando St., Anaheim. Their fourth anniversary Week of Logic is coming up March 18 to 24. Don’t miss their blue Hawaiian cask at Firkfest on March 24.