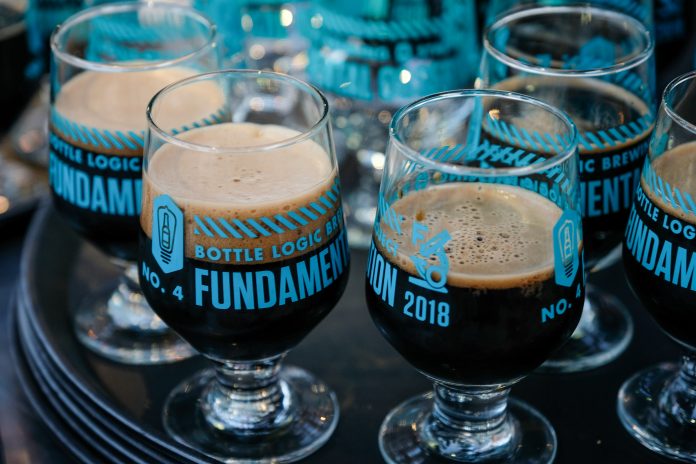 If you ask any Orange County beer aficionado what one of the most sought-after beers in the area is, their response will most likely be Fundamental Observation by Bottle Logic Brewing.

The nebula of FO’s supernova-like explosion in popularity continues to create more superstars with every annual brew. This Bourbon Barrel Aged Imperial Vanilla Stout ranks eighth on Beer Advocate’s list of Top Rated Beers, and it is set to land this weekend in Bottle Logic’s Anaheim Tasting Room.

This year, FO exhibits a balance of flavors that venture toward cacao with the soft, familiar vanilla feature blissfully rolling off the edges of the tongue. In years past, the vanilla had been on the forefront of the nose and palate, often yielding comparisons to brownie batter and melted marshmallows. You’ll still pick up the fresh brownies and toasted marshmallow flavors this year, but they will stop short of becoming cloyingly sweet. Aged in Bourbon barrels from four producers, with pounds of Madagascar vanilla beans added to each barrel, this year’s “Batch Four” release highlights additional characters of charred oak, dark chocolate-coated wafers, rich caramel, and a roasted-almond note in the finish.

“I’m amazed at how toned back the heat is this year’s release,” says Wes Parker, co-founder and brewmaster at Bottle Logic, referring to the low perception of alcohol warmth. “I love the balance of barrel character and beer,” he added. The current installment, relative to previous vintages, is quite balanced with very little warmth (alcohol heat derived from the barrel) to speak of.

The brewery’s Executive Chef Patrick Whittaker, who also supervises the tasting room, is laying foundations for the eventual restaurant concept Bottle Logic will fold into its expansion. Whittaker paired Fundamental Observation with a dark-chocolate budino, which resembled a deconstructed s’mores concept, complete with smoke created from a Bourbon barrel that housed this beer. Beer-ception! The flavor of chocolate, vanilla, smoke, and toasted wood in both items is incredible.

Unfortunately, the online public bottle sale resembled a shooting star, selling out as quickly as a speck of dust burns up and vanishes when entering our atmosphere.

However, Bottle Logic will pour Fundamental Observation, FOMO, the FOCOCO (FO with coconuts) and two more FO 2018 variants at the FO Release Party this weekend, no tickets necessary, 21 and over. Visit Bottle Logic’s website or events page on Facebook for more details. Do not miss your chance to experience this impressive 13.2 percent ABV barrel Aged Imperial Vanilla Stout before it disappears back into the void of deep space until next year.