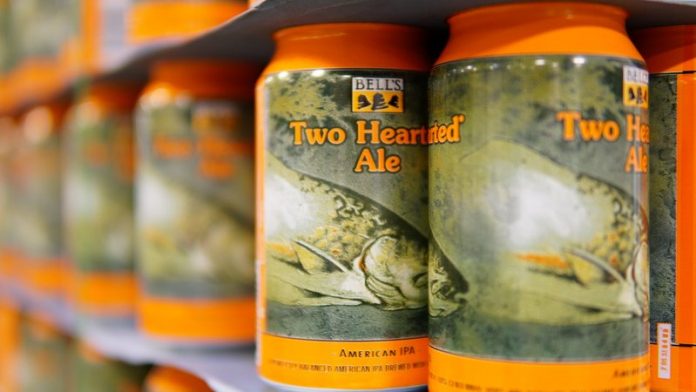 When I heard Zymurgy Magazine named Bell’s Two Hearted Ale the best beer in America, I knew I had to hop on a plane, book a hotel, and see where this magical liquid is made. After all, we all knew Russian River’s eight-year run with Pliny the Elder would come to an end sooner or later, right?

But Two Hearted Ale? The big centennial-hopped IPA is the best in America? I thought for sure some murky haze bomb from New England IPA would get the nod. Regardless, my rock-polisher of a flight touched down in Chicago the day before my tour where I manage a rainy day full day of touristy stuff and cocktails before driving to Kalamazoo in my rental white Chevy Malibu. On a Friday afternoon before the Fourth of July, the brewery is noticeably vacant. The parking lot with only a few cars, two of which have kayaks on the roof. I love that feeling of taking off early on a Friday before a big holiday weekend, and I’m sad to have made my special tour guide, Michael, stay and give me the rundown. “I promise not to ask a lot of questions and won’t keep you long,” I say.

Bell’s Brewery is the seventh largest craft brewer in America as of 2016 and is distributed to 31 states. Larry Bell who founded the company back in 1985 still maintains a role, although he handed off the CEO reigns to daughter Laura in early 2017. The company is 100% independent and will remain so for the foreseeable future. The production brewery in Comstock isn’t a place to clink pints in revelry, however, although my tour started with a few ounces of one of the beers that started it all, Bell’s Amber Ale. It’s one of those beers you drink and say, “I should probably drink more of this,” but never end up doing so as there are so new releases to catch up on. “Bell’s Eccentric Cafe is seven miles away, where you can grab a bite and try beers new, old, and even wild,” says Michael.

The large production brewery in Comstock has over 32 acres of land devoted to brewing, packaging, and shipping their beer, including to Orange County as of late 2015, arriving to distributors via air-conditioned trucks. The facility houses a 200 barrel state of the art German GEA brewhouse, which was shipped via boat on nearby Lake Michigan.

The older fifty barrel brewhouse was originally part of Wolfgang Puck’s Eureka Brewpub, installed by Anheuser-Busch in Los Angeles that was in use for a couple years. It now brews special release treats such as Bell’s Hopslam.

With the intoxicating sweet smell of grains being converted to wort and the occasional burst of hops, our tour continued through steaming pipes, bubbling buckets, and funny bits of personality shine through, such as the hop walk in cooler adorned with a picture of Christopher Walken on the window. I chuckle, snap a photo, and walk on.

Finishing the tour with a taste, I grab another small plastic cup sample, this time of brewery fresh Two Hearted Ale brewed only a few feet away. It’s light, bright, notably soft and hoppy. Notes of tangerine, bready malts, and marmalade fill my nose…the same tasting notes as I’ve jotted down in my notebook at home. Two Hearted may not be the most exciting beer in the world, but it is timeless, easy drinking, and unforgettable. It seems like a call to the Two Hearted river in Upper Peninsula Michigan, where the water and country flows.