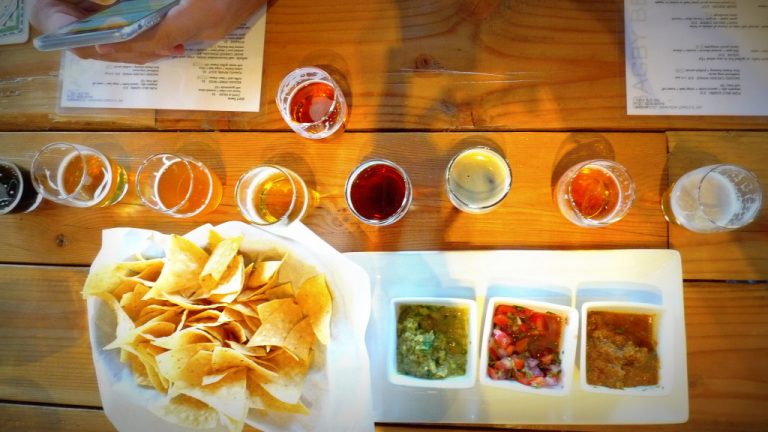 If you picture coastal San Diego in the shape of a ballerina, her tightly-bound hair would be somewhere around the tip of San Clemente, her chest around San Onofre, and her ballet slippers swizzling a perfect pirouette around Ocean Beach. Although her freeways flow like arteries to over a hundred breweries throughout the county, I suggest a safer and easier approach: the straight and spiny train tracks of Metrolink, where a day trip on the Metrolink ($10 unlimited weekend day pass) can connect you to three Oceanside beer havens.

Here’s a sample itinerary, leaving from Anaheim on a Saturday:

11:20 am: Leave Anaheim ARTIC, aka “The Disco Cocoon” via Metrolink Orange Line south.

12:55 pm: Arrive in Oceanside, take a seven minute walk south to Bagby Beer Company, rescue a flight of house beers with appetizers. I suggest splitting the pork belly poutine with a flight of the lighter beers. Bagby Beer started last year in a repurposed car dealership by brewing legend Jeff Bagby. The pub has multiple bars and seating areas, many worth checking out before deciding where to sit.

2:40 pm: Take the 101 or 302 bus south for a cool $1.75, exit Vista Way eight minutes later. Catty corner is Urge Gastropub and Whiskey Bank, a hip new spot with adjoined Mason Brewing Company. Continue the madness with fifty taps and vault of the brown stuff paired with a bevvy of designer burgers. Legend has it if you enter the Konami code that is secretly on the wall in lights, the whiskey vault door will open.

4:00 pm: Take the bus back north (or uber) back to the transit station, walk to the Stone Company Store for one last beer and a growler fill or bottles to go.