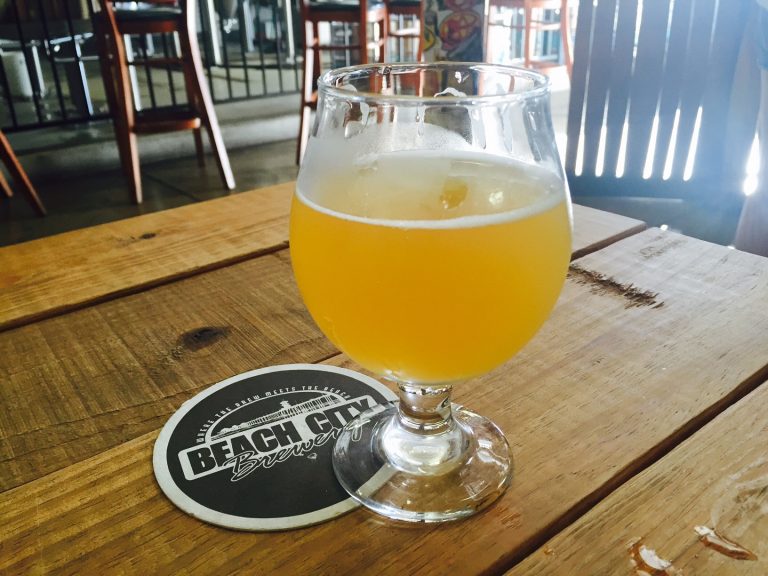 Beach City Brewery did just that with their new beer, Citra W.I.P.A.. The 6.2% ABV white India pale ale is definitely a stand-out in their lineup of relaxed, beach-cruiser style beers. It’s tart, hoppy, and has just enough funk to keep the glass moving to your parched, sun-cracked lips. The beer’s aroma is inviting with wisps of fresh kumquat fruit and touches of mango and grapefruit from the Citra hops. Malt peeks its head out as well, offering a light crackery note. Memories of marmalade on crumpet flash through my head on the first sip, but changes like fall leaves into lemon curds and Emergen-C vitamin packets (in a pleasant way). With the tasting room fans fighting the hundred-degree weather outside, this quenching, effervescent beer is exactly what we need to survive six more weeks of summer. As hops fade with time, the Brett yeast character will continue to develop complexity, perhaps adding layers to the tropical vibe.

“We let [head brewer] Derek have free range on this one and let him go crazy!” says owner Glenn Closson. It should be noted that using wild yeast and bacteria in a brewery (to make sour-funky beer) that doesn’t normally use them is a red flag. Introducing these cultures to a brewery requires a knowing hand and two sets of everything; one for traditional beers and one for the sour or funky side. Although I have full confidence they can manage a wild beer program, it will be interesting to see if it affects long-term beer quality (non-intentional sour or funky beer).

Pair Beach City’s Citra W.I.P.A with dishes that traditionally go with lemon, especially seafood. I suggest a lemon dill salmon, ceviche, or go crazy with a poke bowl. The beer is available for growler fills at their Huntington Beach tasting room, or select accounts around town.