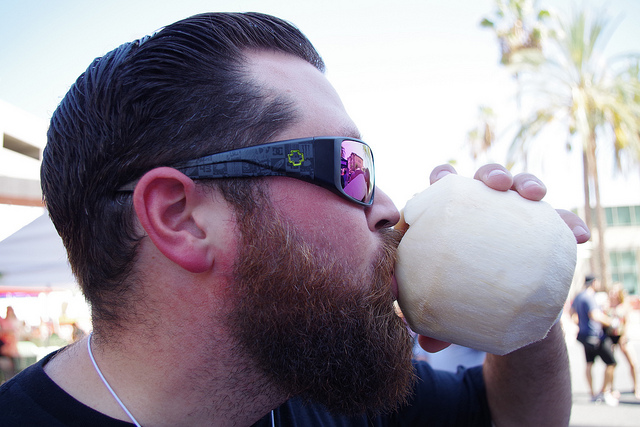 As a glassware geek, I often hear my wife gripe, “exactly how many different glasses do you actually need?” My answer is usually, “all of them.” Sometimes, however, serendipity plays a part in finding the holy grail to hold my beloved beverage. At the third OC Fest of Ales, where food pairings and beer were included, Healthy Junk served fresh coconut juice out of the shell, something that paired spectacularly well with 95-degree day drinking. Instead of throwing the slightly used coconut away, thoughts went to what beer would go best inside of nature’s tropical receptacle. I scanned the EZ-ups and quickly stopped at Barley Forge, “they have a coconut stout, right? Are they pouring it?” We Bieber-screamed while skipping over to their massive M923A2 military vehicle with beer taps hanging out the side. Barley Forge’s rye coconut stout, The Patsy, comes in at 6.6% ABV and smells like a Mounds bar in a glass. The coconut is so fresh and pungent that it evokes memories of applying Coppertone to a loved-one’s back at the beach … in Tahiti … while waves crash nearby. Head brewer Kevin Buckley played around with rye malt in dark beers at his previous employers, Alpine Beer Co. and Latitude 33 in San Diego, where he ultimately first made a pilot batch of the coconut stout for a special account.

“I love using rye, as I’ve heard different people say darker beers can get a cloying sweetness from dark rich malts. Rye is good about cleaning the palate. So you get that nice sweetness, then rye comes in and cuts through to give it a dry finish,” says Buckley.

While summer may be over, grab a young coconut from your local store and a six pack of Barley Forge Brewing’s The Patsy, and be sure to quote Monty Python’s The Holy Grail while drinking it, or you might get turned into a newt. Be on the lookout for The Patsy served in a fresh coconut during Barley Forge’s one year anniversary, October 19th-25th.