Sometimes, we unwittingly overlook breweries that might be causing ripples instead of waves. Although you may not notice them, they are moving the waters nonetheless. One such brewery is Phantom Ales in Anaheim. I bet you didn’t know it won a few awards in the matter of two weeks. No? Here’s the story.

Recently, during the OC IPA Classic at The American Dream in Huntington Beach, Phantom not only placed second with it Juice Jockey, they also took the People’s Choice award. First place was awarded to Chapman Crafted and third to Tustin Brewing Company.

I was fortunate enough to judge this competition. The first flights we judged that morning were quite stellar. There were several panels of two judges, each with their own flights of beers to judge. After talking with the other judges, we agreed it was difficult to choose two from each panel to move to the final 12. After another round of judging, we were down to five. From these five, we had to choose which were the top three. It is difficult to put into words how technical we had to get to even get to a top three, let alone then having to put those three in a sequential order. Phantom Ales placed second.

The top five beers were also served to guests as a flight without knowing what the beers were, just as we had judged them. The guest only had to choose which was their favorite overall. Purely subjective and based on personal preference, yes. However, when something tastes good, it simply tastes good. And this beer is mighty tasty.

That’s not all! In the Los Angeles International Beer Competition, Phantom won bronze in coffee beer (another panel I judged), and gold for American-style lager. The coffee beer placed out of almost 50 coffee beers my panel partner and I judged that morning into the early afternoon. After having so many wonderful, spice-infused this and vanilla/cocoa that, the Kona Lager stayed in our minds. It placed because it’s exactly what it says it is: coffee, amber, lager. That’s it. Simple. It’s beautiful!

I feel lucky to have judged two separate competitions, and in both serendipitously I awarded Phantom Ales. All judging is done blind with only entry numbers given for each beer. As a fan of the underdog, one can imagine my joy when I found out the results. It pales in comparison to the jubilation I sincerely felt from Jack Stimmler, general manager, and, Bryan Hendrickson, head brewer, upon telling them the news. “You made my day, Charlie!” Stimmler proclaimed while I handed over the ribbons. “I love brewing; it’s my passion,” Hendrickson said. “I am happy to do what I do, and this just make it even better!” 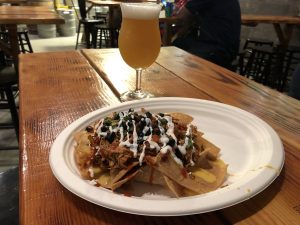 Phantom Ales also has a small kitchen serving up lovely grub. I’m a fan of the chicken nachos, at left, and they pair nicely with Juice Jockey. Bring your appetite along with your thirst for the award-winning beers. They may not be as popular as some of the other Anaheim breweries, but they are holding their own. Four medals/ribbons, three beers, two competitions, one Phantom Ale. Check them out!