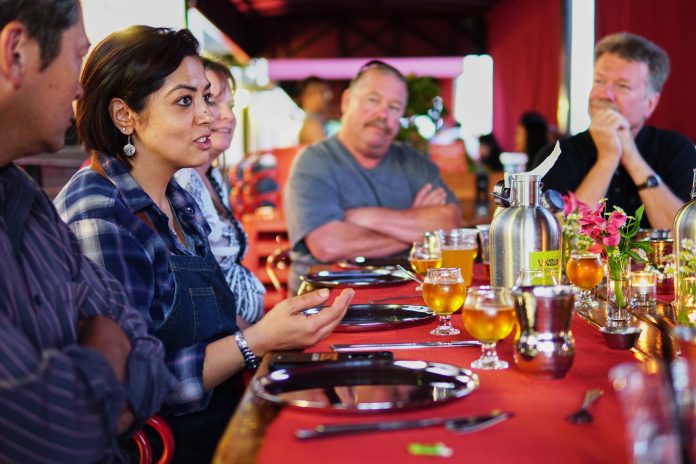 If you told me five years ago that Orange County would have a beer dinner on the bed of a train featuring the fresh Indian flavors of Adya restaurant paired with beers made 50-feet away, I’d be quick to recommend a good therapist. But here I am, on the rails in Anaheim’s Packing District at Adya, somehow reenacting a scene from Wes Anderson’s Darjeeling Limited with a shot of Pani Puri and an Unsung Brewing session IPA to start.

Full disclosure, like a learned Indian parent, I arranged this marriage of unlikely bedfellows, for no better reason than to have a fun event during OCBeerWeek. I also really wanted to prove that an all-IPA beer dinner can work quite well, given the right beer-drinking chef and cuisine combination. I mean, IPA literally means India Pale Ale, so why not?

A few weeks prior, chef-owner of Adya, Shachi Mehra, and I discussed the menu, the flow of dish intensity, and hop notes for each IPA. It was truly fun to watch her creativity spark as she feverishly scribbled down the menu in a well-worn journal. I worked with Unsung owner Michal Crea to make sure five fresh IPAs would be available for the event, then a few weeks later, here we all are seated family style at a cozy table as the sunset glows down the historic Anaheim train tracks.

Back to the Pani Puri, which is essentially a light and crispy shell on top of a shot glass filled with potato and tamarind mint water, I don’t think anyone expected such a fun start. We all drop the shot into the shell, pop it in our pie holes, then voila…chase it down with Unsung’s Session IPA, Short Round. The light body of the beer has some dank and earthy hop notes that play well with the pani-popper.

The dinner’s inspiration comes from a few regions of India, and the western coastal area called Goa is where dish number two is popular: Shrimp Balchao is served on a thin crispy sheet of rice paper with some cooling avocado raita drizzled on top. Since the dish is quite fiery, we go to New England for the beer pairing with Unsung’s Cygnus Hazy IPA; a west coast IPA would have intensified the situation. The juicy pineapple-forward beer brings a nice tropical vibe to the mouth party, and there isn’t a full plate or glass left on the table.

I’m convinced no beer dinner is complete without pork belly, and chef Shachi doesn’t disappoint with her tamarind-glazed pork belly with pineapple-ginger potatoes. The dish has everyone thinking breakfast with the hashbrown-style potatoes, and again, Anthia IPA offers a nice clean finish as the suds quickly scrub away the richness of the dish for the next bite.

By course five, most beer dinners are filled with rosy-cheeked laughter, and ours is no different. I’ve been to more than 50 beer dinners, and this is the first time I’ve seen a chef sit down in the middle and join in the conversation and food.

Unsung’s Naturia Double IPA paired with her coconut lamb and vegetable curries is a huge hit. Both dishes, served family style over fluffy white rice, are as warming as they are satisfying in the cool night air.

Closing out the evening, the table huddles together as we wait patiently for dessert, this time with Unsung’s coffee amber, Propellerhead, paired with Adya’s spiced chocolate bread pudding. I’m glad chef talked me out of going with yet another IPA for this course, as the coffee-forward beer and light and spongey bread pudding are magical together.

Although we somehow managed the Packing House’s first beer dinner, I doubt it will be the last. Chef Shachi might be hooked on the concept for the time to come! See you at the next one?

Find Adya at Anaheim’s Packing District. Unsung Brewing is across the street at Anaheim Make, a new gathering spot featuring the brewery, a winery, and a distillery; the latter two are yet to open.